Member of the Donquixote Pirates

Watching after the kids in Caesar Clown's laboratory

Help Doflamingo with his goals

Monet was a major antagonist in the Punk Hazard Arc. She was an executive of the Donquixote Pirates. She also posed as Caesar Clown's secretary. She was also the older sister of Sugar.

Monet is a woman who was a spy undercover for Donquixote Doflamingo as Caesar's secretary and one of his subordinates. She became a harpy by giving up her human arms and legs and replaced them with large bird parts. She ate the Yuki Yuki no Mi, (Snow-Snow Fruit), and gained the ability to turn into and control snow.

She was very devoted to Doflamingo. After she was defeated by Zoro, she crawled her way into a secret room where there was a button that would blow up the entire research facility. But before she could, Caesar stabbed her heart (removed earlier by Law and thinking it to be Smoker's). As she was about to die, she said goodbye to her captain and said that he would be the future king of the pirates.

Monet was usually shown to be a cheerful and flirtatious individual. She can also be reserved to herself and enigmatic. Just like Caesar Clown, she has no care for the children (that they kidnapped) and has no remorse for drugging them. And like Caesar, Monet enjoys seeing people suffer like when she was giggling at Law who had his heart crushed by Vergo. She was also impulsive when it comes to keeping the children away from the Marines and would kill anyone who got in her way. Unlike Caesar, Monet actually shows concern for her teammates such as Vergo who was in danger of being exposed to Shinokuni (the poisonous gas). Monet was respectful towards Doflamingo and sees him a person suitable to become Pirate King. Her devotion to Doflamingo was so great that she does not mind taking an order to kill herself in an explosion to take out all his enemies on Punk Hazard.

Monet is a skilled fighter. She was able to hold back an entire group of Marines from advancing towards the children. With the Yuki Yuki no Mi, Monet can manipulate and turn into snow itself. In her monstrous snow form, she can freeze and bite off her target's limbs. Since she was equipped with bird wings and claws, she can fly at an impressive speed and grab onto her target with ease. Monet is also a capable spy as she was able to infiltrate Dressrosa with ease and spy on her target long enough for the Donquixote Pirates to make their move. She is also entrusted by Doflamingo to watch over Caesar Clown on Punk Hazard. 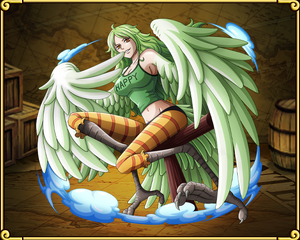 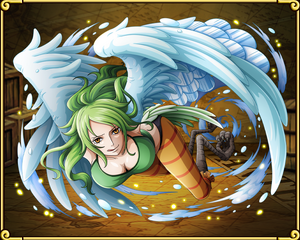 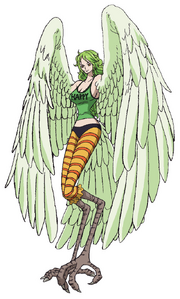 Monet in the past with her human arms and legs before becoming a harpy. 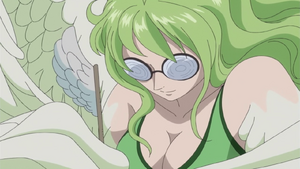 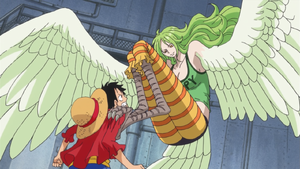 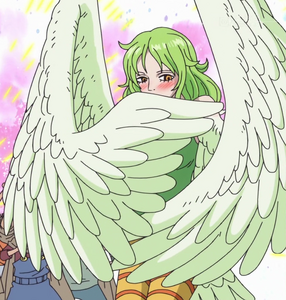 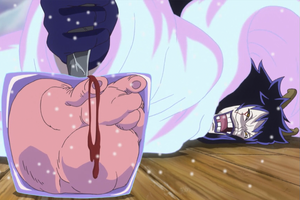 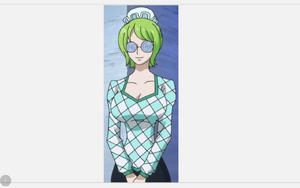 Retrieved from "https://villains.fandom.com/wiki/Monet?oldid=4076425"
Community content is available under CC-BY-SA unless otherwise noted.