The Money Mummy is a one-time villain from the Cartoon Network imported series Teen Titans Go!, only appearing in the episode "Pyramid Scheme". He is an ancient mummy who leads a pyramid scheme.

In "Pyramid Money", Starfire, Cyborg, Beast Boy, and Raven got involved with a pyramid scheme, where the person at the top of the pyramid was the Money Mummy. At the end of the day, the Money Mummy wanted his cut of the money and the Titans scrambled to collect all of the money they saved but the Titans had already gone awry with the money and eaten most of it, so what they could provide him with was scarce.

The Money Mummy's pyramid rose from the ground and he stood on top of it, with a big light dramatically shining from behind him. The Money Mummy crawled down the stairs of the pyramid and faced the Titans, demanding his money. Beast Boy handed him the briefcase full of a few slobbery dollars and a half-eaten sandwich. As to be expected, the Money Mummy was not impressed and he pumped them for more. Upon hearing that his inferiors ate the rest of their money, the Money Mummy became extremely enraged and punished them all for their failure to meet his demands.

The Money Mummy trapped all of the Titans (including Robin for some reason) and forced them to become slaves, who would haul giant bricks across the desert to build his next pyramid, while his mummy minions watched over them on their horses to keep them in check and whip them, if they started slacking behind.

The Titans learned the error of their ways and apologized to Robin for ignoring his warning before and getting involved with such a dangerous pyramid scheme. Robin forgave them and said that there was only one way to get out of doing hard labor and that was with the other kind of labor: pregnancy. Beast Boy turned into a hen and started laid an egg that would hatch into a chick so that he could go on the maternity leave or in his case, the paternity leave.

The Titans escaped their job and Raven gave her former slavedrivers one final goodbye, by crushing them with the brick they'd been hauling before. The Titans broke into the pyramid, where the Money Mummy resigned and attacked all of the mummy minions in there. They fought off all the smaller mummies, before finally coming across the Money Mummy, himself. Beast Boy got into a cowboy standoff with the Money Mummy, which ended up being pretty anti-climactic, as before any of them could draw their guns, a golden bear driving a car came by and ran the Money Mummy over, crushing him and allowing the Titans to take their stolen money back from him. 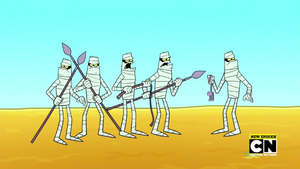