Mongal is a minor character in the 2021 film The Suicide Squad, the tenth installment in the DC Extended Universe.

She was an alien warrior from the planet Warworld who somehow found herself on Earth and held captive in Belle Reve. She was offered a place in Rick Flag's first Task Force X team sent to infiltrate Corto Maltese which she accepted.

She was portrayed by Mayling Ng.

Not much is known about Mongal aside from the fact that she is a being from another planet that was imprisoned in Belle Rave, and she joined Task Force X on Rick Flag's team to infiltrate Corto Maltese alongside Captain Boomerang, Blackguard, Javelin, The Detachable Kid, Weasel, Savant and Harley Quinn. During the helicopter ride to the team's drop off point, she remained silent and kept to herself during the events which unfolded with her teammates, including Blackguard freaking out upon gullibly believing Harley that Weasel was a werewolf until Rick Flag managed to calm him down by explaining what he really was.

When the team reached their drop off point and swam to the beach on Corto Maltese Flag prepared to brief them on what to do only for Blackguard to betray the team by attempting to surrender to the Corto Maltese military only to be killed for his trouble. The soldiers then battled with Task Force X and during the chaos Mongal leaped onto a helicopter in an attempt to kill the soldiers inside in spite of Flag's protests.

Mongal succeeds in bringing down the helicopter however she unfortunately loses control of it and begins screaming wildly as it flies into the trees and shreds them before bursting into flames, in the process Mongal accidentally kills Captain Boomerang due to shards of bark shooting directly into his head, neck and torso before the blade of the helicopter shredded his remains. Mongal herself crawled out of the debris of the crashed helicopter engulfed in flames and although she did her best to put them out she was unable to and eventually died due to her body sustaining too much damage as well as smoke inhalation.

Not much is known about Mongal however from little we see of her she appeared to be a very quiet, stoic and proud individual who wasn't afraid to throw herself into action which may have been a contributing factor in her undoing. She was also somewhat protective of her teammates.

Mongal was a tall and muscular alien with bright orange skin, yellow eyes and red hair which was tied securely in a high braided ponytail. She wore typical battle armour of her species, a purple sleeveless bodysuit and matching headdress and shoes, she also wore brown gauntlets and greaves which helped house her weapons.

Mongal with his teammates on a poster for The Suicide Squad. 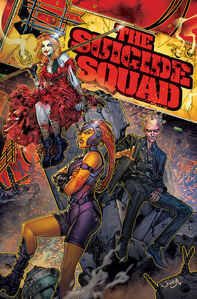 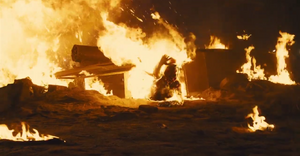 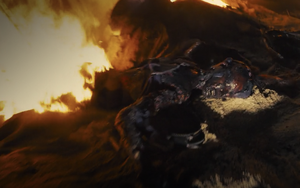