Dictator of a Planet (formerly)

Conquering all planets in the universe.
Destroying Earth to stop the Reach.

Mongul is a supporting antagonist in the second season of Young Justice and a background antagonist in Season 3: Outsiders. He is the fourth animated appearance of the DC villain Mongul.

He was voiced by Keith David, who also played Dr. Facilier in Disney's The Princess and the Frog and Malcolm Kane in Stretch Armstrong and the Flex Fighters.

Mongul was the cruel dictator of a planet until he was ousted by another tyrant. Eventually, Mongul obtained the crystal key which activates Warworld. He intends to reclaim his ruling position by first conquering every planet in the universe.

Mongul is the commandeer of Warworld, an artificial, planet-sized satellite. By transmitting his thoughts into the systems of Warworld, he can control the entire satellite from the helm of the device. He is present during the Justice League's trial on Rimbor when suddenly it is revealed that the alien invaders known as The Reach have arrived on Earth.

After he learns that the Reach is on Earth, he steers Warworld towards Earth. When the Reach ambassador finds out that Warworld is approaching, he contacts Mongul and orders him to stay away because Earth is now Reach territory. Mongul replies that this is the exact reason why he has come. The Justice League opens a communication canal with Warworld as well and state that they wish to negotiate. However, Mongul replies that he does not wish to negotiate. He claims that the Earth being under the influence of the Reach is too dangerous for his long-term-plans and that Earth must thus be destroyed. He adds that the earthlings would thank him if they knew what they were in for with the Reach. He then starts activating an attack procedure, blasting a giant laser beam at Earth. This is stopped in time by Doctor Fate and other members of the Justice League who rush at Warworld to stop Mongul. Meanwhile, the Young Justice team manages to infiltrate Warworld.

Inside, they eventually reach the command chamber where Mongul states that he is insulted by the meager force Earth has sent against him. The group attacks him but Mongul fends them off rather easily. He manages to grab Superboy and makes fun of the Kryptonians and their faith in their powers. He adds that Superboy is not the only one belonging to a race of the Red Sun. While talking, he is suddenly tied by Wondergirl's lasso. He merely grabs it, pulls her towards him and beats her unconscious. With Arsenal the only fighter remaining, Arsenal shoots an arrow containing a sedative at Mongul. However, despite the knock-out gas Mongul breathes in deeply and smiles, claiming that it smells like victory.

Having beaten the entire team, Mongul returns to his command chair. He keeps talking, claiming that the death of Earth at his hand would have been a mercy compared to what the Reach will do to them. He is insulted that his mercy seems not to be appreciated. He then activates a special protocol, unleashing all of Warworld's weapons at once. Due to the immense amount of missiles launched by Warworld, some get past the Justice League and the Reach steps in to destroy them, sacrificing two thirds of their fleet in the process.

In the same time, Impulse, Beast Boy and Blue Beetle locate the crystal key. Meanwhile, other Young Justice members have reached the core of Warworld but cannot breach it because every amount of energy they blast into the core is rerouted. Nonetheless, they have an idea and hack the failsafe system, rerouting all the energy blasted into the core into the chair of Mongul. In his command center, Mongul is hit by the entire energy in a massive electricity blast and is severely weakened. He stumbles away from his chair, causing Warworld's attacks to cease, and is then taken down by the combined efforts of the Young Justice team. He is tied up by Wondergirl's lasso.

After his defeat, Mongul is incarcerated by the Reach. One of their henchmen, Black Beetle, furiously blames Mongul for the destruction of a great part of the Reach fleet that was destroyed by Warworld.

When the former captives of the Reach, who gained superpowers by the Reach's experiments, enter Warworld to save the captives, Arsenal frees Mongul from his statis pod. After regaining consciousness, Mongul is immediately attacked by Black Beetle who blames him for the destruction of the Reach fleet.

Black Beetle is eventually joined by Green Beetle and together, they manage to lock Mongul back up in his stasis pod. However, once he returns to his position, Black Beetle realizes that the fight was only a distraction and that the crystal key of Warworld has been stolen while he fought Mongul. 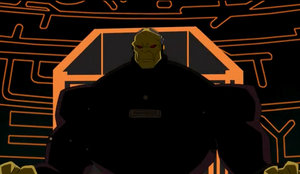 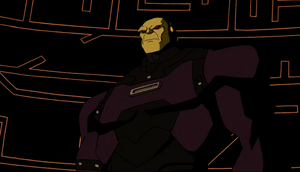 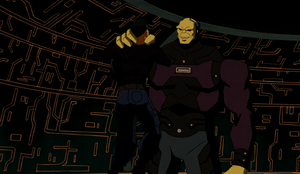 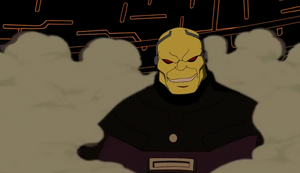 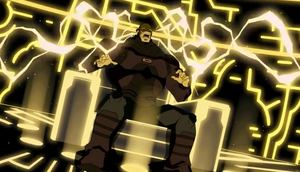