Corrupt Businesswoman
Monica is a minor antagonist in Los Casagrandes, only appearing in the episode "The Boy Plays in the Picture". Monica is a corrupt businesswoman who runs Super Duper Awesome Toys. She signs contracts with children, to make them advertise her products to other children.

She is voiced by Kat Palardy.

In "The Boy Plays in the Picture", Monica saw how popular Carl Casagrande and Sergio were online with their unboxing videos and signed a deal with them, saying that she'd keep sending them toys if they did unboxing videos of her products. She gave them an evil skull contract and Carl tricked Hector into signing it. Carl started off having tons of fun unboxing toys and making videos, but then when the workload got too heavy, he tried to opt out of it. He face times Monica to tell her that he wanted to qui, but Monica sat upon her demon throne and told them that if he quit, she would sue his family for everything they're worth, which included Lalo. Carl told Carlota the news and after some panicking, Carlota had the idea to have Carl sabotage his career. Carl acted horrible in his next live video, which Monica was monitoring herself, where he insulted the toy of the year, El Falcoln's Fortress, and destroyed it. Monica was so mad that she ripped up Carl's contract and told him that he'd never get any free toys again. As Monica left, Carl was relieved to be free of the contract but Sergio kept following her, begging to be brought back into her business.

Monica is a Caucasian adult woman with bright neck-length blonde hair. She is a tall and lanky woman with sculpted facial features. She wears a pink jacket, a white buttoned undershirt, a brownish purple skirt, a black belt with a golden buckle, light brown shoes, and red lipstick.

Monica is a cold and heartless corporate hack who only cares about making money. She is a selfless and cruel woman who doesn't care about the well-being of her clients, caring solely about the revenue they generate for her, rather than if they're okay with the work load. She tries to make herself look like a nice person by giving them free toys as a form of bribery but in actuality, this is a false face to make her look good and get people off her case. Monica's villainy is subtly demonstrated by the fact that she cackles maliciously, when she seals a deal with a client, the fact that the words on her contracts are indented into the shame of a skull, and the fact that she lives in a demonic underground cavern of spiky rocks, where she sits upon a floating throne made of slime and bones, which is flanked by two skulls set on neon purple fire, being used as torches. 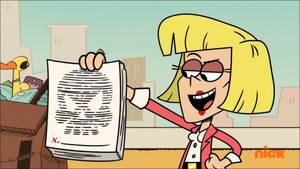 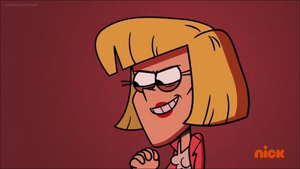 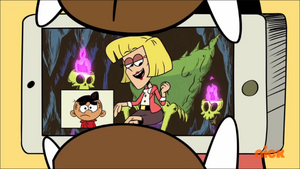 Monica sitting upon her evil throne. 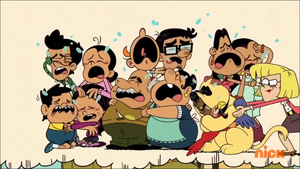 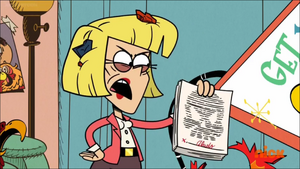 Monica fires Carl Casagrande as her client.
Add a photo to this gallery

Retrieved from "https://villains.fandom.com/wiki/Monica_(Los_Casagrandes)?oldid=4245585"
Community content is available under CC-BY-SA unless otherwise noted.