Monica's education was based at University of Padua. She was a promising biochemist who learned of the work of Bruce Banner, who she eventually tricked into falling in love with her so that she could steal his secrets. She used what she learned to win a Noble Prize in antitoxins. Her time spent in the western United States taught her that she should spend her time killing people instead of healing them. She experimented on young children, including her own daughter Carmilla Black, an incarnate of Scorpion. She later tried to get her to join A.I.M., but S.H.I.E.L.D. got to her first.

Monica assumed the position of "Supreme Scientist" when M.O.D.O.K. killed the one before her. She commanded apart of the organization that M.O.D.O.K. had no control over (a cell). Many times did she try to increase it's size and power, but her plans were always thwarted by Heros and even some agents of A.I.M., including M.O.D.O.K..

Eventually, she took control of one of M.O.D.O.K.'s 11 (Chameleon). She used him to infiltrate the organization along with Ultra-Adaptoid. She assisted in hopes to stop M.O.D.O.K. from taking control of the Hypernova weapon. They ended up buying it, but little to their knowledge it was unstable, thus the reason for M.O.D.O.K. selling it. It blew up everyone in the A.I.M. base that it was taken to, Monica being the only surviver.

While kidnapping a handful of scientists, she tried to recruit Mocking Bird. She ended up being thwarted and teleported out of town. She also later hired Deadpool himself to steal M.O.D.O.K. clones from H.A.M.M.E.R..

She was recruited by Norman Osborn to be apart of H.A.M.M.E.R., and after she joined she turned him into a "Super-Adaptoid".

Roberto Da Costa eventually bought A.I.M. and tried to recruit her into getting rid of the evil scientists, but she betrayed him. She instead turned to Andrew Forson's new A.I.M. in his attempt to make it into an empire. Roberto Da Costa ended up defeating Andrew, becoming A.I.M.'s new leader, causing Monica to seek vengeance. She would return with Andrew to try and kill all the traitors, but they were stopped by Thor.

Her latest appearance was joining J.A.N.U.S. and taking over the Ravencroft Institute.

In Marvel's Spider-Man, she appears in "School of Hard Knocks". She runs "Experiment 237", where she combines students with the combined the powers of other Heros and applies them to students. She is confronted by other Avengers, and afterword she manipulates another student into syncing the powers with two other students. It was eventually able to be reversed and the A.I.M. agents were arrested. In "Amazing Friends", she experiments on the hero Groot so that she can make soldiers out of him. She is eventually thwarted.

Monica plays a major role in the M.O.D.O.K. Hulu series. She is a scientist who finds that M.O.D.O.K. is no longer the villain he once was, causing the A.I.M. organization to suffer because of it. She insults him all throughout the series, all the while she continues with her experiments. We also delve into her past, finding that M.O.D.O.K. was her hero, and that the first day that she joined A.I.M. she killed an unnamed Avenger, M.O.D.O.K. taking the credit. She has a battle with M.O.D.O.K. and kills him during it, but she revives him and is crowned Supreme Scientist of the facility. She eventually ends up befriending M.O.D.O.K. though their common goal of trying to regain control of A.I.M.

Monica plays a crucial role as the central antagonist in Marvel's Avengers.

Monica appears as one of the many villains in Marvel Strike Force.

Monica appears in Marvel Powers United VR. In the series she tried to harness the power of the Cosmic Cube, but was thwarted in her attempt.

Monica has genius-level intellect. She has access to all of the advanced weaponry of A.I.M., as well as authority and status over the organization. She is able to create different bio-related weapons and pills with ease, giving her an advantage in combat despite her lack of superpowers. 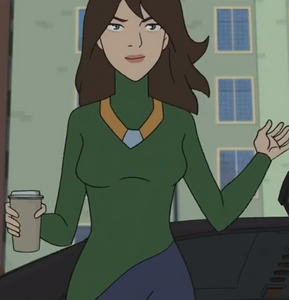 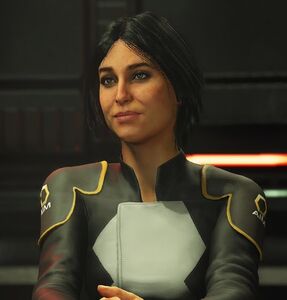 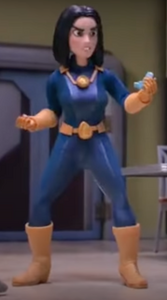 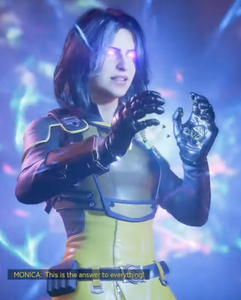