View source
watch 01:30
Who is Monika?
Do you like this video?
Play Sound

Hanging out with friends (formerly).

End up together with the player.

Escaping torture.
Apologize to the player for her actions (all succeeded).

She is a character in a dating simulator game, who gains self-awareness and the ability to manipulate the reality of the game itself. Motivated by her jealousy of the other characters for having a more dominant romantic role with the player and by a desire to escape the mental torture she endures within the void when the game is turned off, she manipulates the game's programming in an attempt to romance the player themselves.

Through most of the game her speech is conveyed through text with no voice, but during the song "Your Reality", she was voiced by Jillian Ashcraft.

Monika is a character in the visual novel Doki Doki Literature Club!. She is also the Literature Club's president, as well as one of the main characters of the game. While initially appearing as a nice girl, she eventually claimed she had an epiphany which made her discover that she and all of her friends were in a game, drastically changing her attitude towards the other girls. As the president of the Literature Club, she was able to manipulate the script of the game and break the fourth wall. This is seen early on in the game when she gives her "writing tips of the day", that directly break the fourth wall.

Unlike the three other girls, those being Sayori, Natsuki, and Yuri, Monika had a rather minor role in the game and was not able to be "picked" as a romance option. This led to her using her powers of manipulating the script to do things like emphasizing the negative traits of the other characters, in the hope that the player would choose her instead of them.

After the protagonist noticed that Sayori (his childhood friend) seemed down about something, he told Monika about it and she said that she would "have a talk with Sayori". Jealous of the friendship that Sayori and the protagonist have, Monika instead tells Sayori that she should kill herself, which Sayori does later on. Because of this, the script gets entirely broken and decides to fully delete Sayori from the game, which makes the entire game restart with this time Sayori being completely absent. Due to her manipulating the script, from this point onward there are a lot of "glitches" in the game, and she has manipulated Natsuki and Yuri's, the other two main characters, personalities to be more intensive. She often uses the script to make other characters try and get the main protagonist to spend more with Monika, A famous example of this is when she made Natsuki repeatedly say "Just Monika".

Eventually, Yuri's obsessive personality is so intense that she kills herself over the player, which makes Monika completely delete Yuri's character file (and also deletes Natsuki's character file right after) and restart the game with just her. When she is alone with the player, she reveals she is not in love with the main protagonist but with the player themselves. She continues to talk with the player, unless the player completely deletes her from the game by going into the game files. When this is done, she will initially be mad at the player, but then shows regret for her actions. In an attempt to repent for her wrongdoings, she brings back the other three girls and fully removes herself from the game.

If the player attempts to reload or copy her file back in, she sends them a message asking them not to toy with her heart and she no longer wants to come back after her previous actions. However, when the player restarts the game with the other three girls, Sayori gains self-awareness and data manipulation powers as well since she is now the president of the Literature Club. She thanks the player for ridding the game of Monika and attempts to trap the player in the same classroom Monika did, in the hopes that she will be in a relationship with them forever.

Monika, realizing that no one is ever going to find happiness in the game, deletes it entirely, possibly taking her existence and that of her friends with it. However, before the credits roll, she communicates vocally with the player for the first time and plays and sings "Your Reality" on the piano as she deletes the credit files, and eventually the script itself, but not before leaving a goodbye note.

However, if the player saved each and every one of their interactions with the girls in Act 1 (particularly their CG images) before the Sayori suicide scene, Sayori retains her sanity and thanks the player for everything and says that this is the end of the game. Monika will still play her song over the credits, however out of the realization that the Literature Club is better this way, she does not erase the images during the credits (however she does get rid of the script anyway). She also chooses not to leave a note behind. Instead, game creator Dan Salvato writes a thank-you to the player.

After the game script is deleted, the player can access the files and see those three of the four girls (Monika is still missing) still retain their files, implying that they may still exist (and since Monika survived without her file, the same may hold true for her).

Monika is the least talkative character in Doki Doki Literature Club, but this is implied to not be through choice. She is often overshadowed by the other club members. Because of this, she tried to ruin the image of the other literature club members by altering their personalities through coding. At first, she is seen as an "advisory" character, usually breaking the fourth wall to offer writing tips and other advice about game functionality.

From Act 2 and onward, she displays a more yandere-like personality, as she deletes the other characters and starts on insisting that they should spend time together throughout Act 3, occasionally showing her feelings of confinement as well. All of Monika's poems are about her realization or about the player. Being somewhat of a yandere, she is extremely jealous of the other characters since they are spending more time with the player and not her, hence why she deletes them after altering their personalities and destroying the whole game itself. She also looks down on them as being bound by their programming, not viewing them as "real" as herself until her deletion. This is also one of the reasons she grows obsessed with the player, as she regards them as the only other thing with free will that she knows about.

According to her dialogue in Act 3, when the player leaves the game, Monika is instantly put to sleep, leaving behind nothing but her thoughts. After a few seconds, her thoughts are filled with "incoherent, jumbled patterns". She then starts to see static, colors flashing rapidly and hears screaming, unable to think anymore. She compares that to being trapped in Hell. It continues until the player returns back to the game.

Unlike other characters, when Monika is deleted in Act 3, her consciousness is still present and continues to be present in Act 4 in the normal ending, where her 'spirit' communicates with the player and Sayori in the room where she was deleted in. Although Monika is aware of the player's existence, she does not know what the player's actual gender is. Regardless, she still falls in love with them, but refers the player as her "boyfriend", hinting that she may be heterosexual. In addition, Monika is aware when the game is being recorded[1] and will attempt to jumpscare anyone who is watching her.

Monika reveals several things about her at the end of the game, if the player spends time with her. Examples of this include; She is a vegetarian, likes shopping for skirts and bows, and has a Twitter account named "lilmonix3".

Monika is a teenage girl with long light brown hair that she keeps in a ponytail tied back with a large white bow. Her eyes are green and look gentle. She has white toned skin. She wears the typical blackish-gray school uniform which is a grey blazer of a white-collared shirt with a brown sweater vest over it, topped off with a red ribbon. She also wears the dark blue skirt, black thigh-high socks, which are in stark contrast to the rest of the cast's white knee-socks, and white and pink uwabaki slippers, a Japanese type of slippers. Monika's presumable height is 5'3 (160cm).

At first glance, Monika may appear to be nothing more but a simple school girl. However, in truth, she is an omnipotent force that is capable of manipulating the entire game itself due to her ability to reprogram the game's source code. Even after the player deletes her physical file, she still has access to all of the abilities listed as shown when she deletes Sayori in Act 4 (if you get a bad ending), who was just beginning to possess the same abilities. However, she herself notes that she is not particularly good at coding, and thus her powers usually leave glitches in her reality, hence many of Act 2's more surreal imagery. Her powers include: 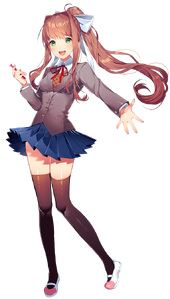 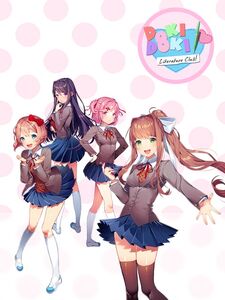 Monika in her school happily talking to the player. 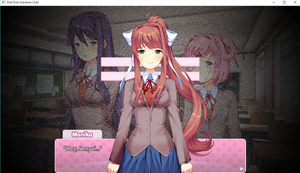 Monika with all her members. 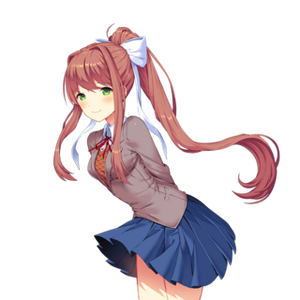 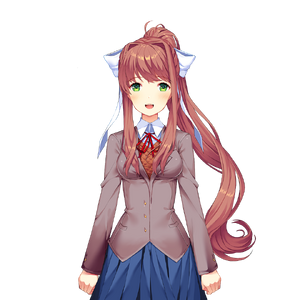 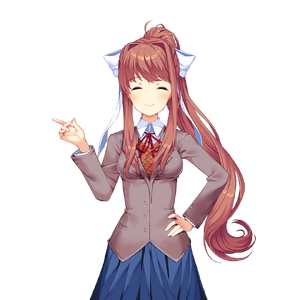 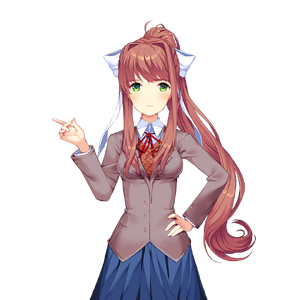 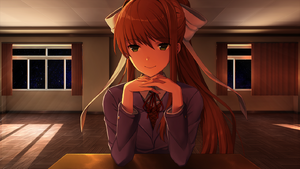 Monika after deleting everything to proceed to have the Player all to herself. 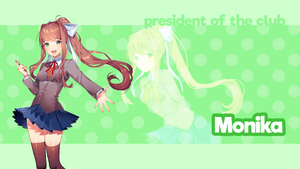 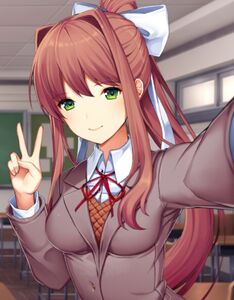 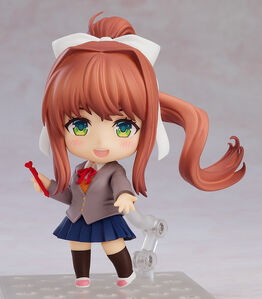