Monika Drevis is the late wife of Alfred Drevis, and mother to Aya. During most of the game she is the main antagonist, having taken Aya's father. Until the end of the game, she is mainly viewed in flashbacks, and a few cutscenes. At the end of the game, she is found in the darkness having bested Maria, and in the process of taking Alfred with her to the afterlife. It is revealed that the reason she cursed him was because she wanted to protect Aya from her husband, Alfred.

When she was alive, Monika was a very beautiful and well endowed woman. Like her daughter, her hair is long, and reaches down past her waist, with the bangs being parted on either side of her face in a messy manner. Also like her daughter, Monika has blue eyes. Throughout the game, she's only seen wearing one outfit; a rather regal blue dress with white fabric to accentuate her chest.

Monika Drevis is a kind-hearted and thoughtful woman, forgiving and with a tendency to overlook the mistakes of others. She is mostly seen in flashbacks taking care of her daughter, Aya. In death, however, her kind heart was transformed into a vengeful spirit hell bent on having her revenge, raising any tormented victims her husband had caused.

Her literal undying love to her daughter is what triggered the curse and, thus, started the game. Despite the activities of her husband, having an affair and a grotesque obsession, she still strives to love him. Her love, however, is never truly reciprocated by the man she loved her whole life. The last straw of their relationship was when she had overheard the plan of her husband for their only daughter. Disgusted and distraught, Monika threatened her husband to leave with their daughter that unfortunately leads to her premature death. But even in death, she still loves him.

She took an apparent dislike of their maid, Maria, for having an affair with her husband. Though she never made a direct confrontation of the matter, she continually distance herself to the maid. Strangely, despite having the chance to kill the maid with her newfound powers, she never did.

In the events of the game, she took the facade of an obssessed spirit trying to drag her husband to the grave to be with her forever. In reality, it was to save Aya from her own father who planned to turn her into a doll. Depending on what the ending the player chose, she managed to reveal her true intentions to Aya with the last of her strength. As a precautionary and preventative measure, she instructed some spirits to protect Aya and to hinder her journey.

There is an odd characteristic of Monika in notes scattered in the game in the second playthrough. It suggest she is not all innocent, benevolent, and compassionate as it seems. In one of the notes, she had first met Alfred when the man nearly killed her and left her for dead. As grim as it is, she instead developed feelings for him, treating that he left her alive as a merciful and sympathetic act. This fateful meeting led to her giving letters of affections: to stay with her mansion with the promise of a new workplace. Also, in one of the notes, she tried to give Aya rats/rabbits to observe if their daughter is truly becoming her father, much to her delight. In a more subtle note, she read dark themed books to Aya before going to sleep. Even Ogre noticed that the bookshelf in Aya's room is filled with "interesting" books. It is also possible that Monika was the one who gave Aya the chainsaw, as it was in a place that was out of Aya's reach and that meant Monika could reach it. 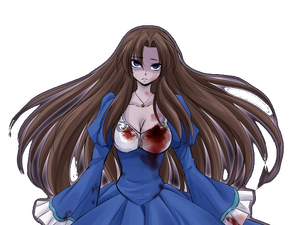 Monika as a ghost
Add a photo to this gallery
Retrieved from "https://villains.fandom.com/wiki/Monika_Drevis?oldid=3827251"
Community content is available under CC-BY-SA unless otherwise noted.