cosmic entities
The Monitors are a villainous race of virtually omnipotent aliens from the DC universe.

They were once a threat to the multiverse, though due to changes in the DC multiverse the entire species is extinct save for a single survivor (who is more benevolent than his brethren).

The Monitors are comparable to beings such as the Celestials in Marvel comics and as such were instigators of large-scale events that would reshape the nature of their respective universes.

The Monitors were a race created when the first Monitor began to examine the DC multiverse and found itself overwhelmed by the concept of the "story" within.

Thus an entire society of entities sharing a fraction of the original Monitor's power was born and began to see themselves as descendants of its great power.

Unfortunately the Monitors were also vampiric in nature and began to see themselves as the supreme overseers of time and space, this led to an inevitable quarrel as the Monitors questioned how they should shape the DC multiverse, they were especially concerned with how to deal with "Multiversal Anomalies" (beings that could cross alternate worlds).

Ultimately Monitor Solomon convinced a great many of the Monitors that such things must be violently purged and thus a mass-eradication of entire species began and the Monitors grew to be hated as tyrants.

After the creation of the 52 in the new multiverse, a new race of 52 different Monitors is seen to be active trying to protect the multiverse from corruption as a community. Each monitor is assigned to its own world, and they all vary at least slightly in appearance.

A version of the Anti-Monitor is also seen to be active helping the Sinestro Corps on Qward. Although they are seen again, the Monitors play their next biggest roles in Countdown.

A Monitor appeared in the Arrowverse crossover, Elseworlds, named Mar Novu. Mar Novu visited many different Earths in the multiverse, testing them in an Elseworld to see which Earth should be prepared for an upcoming threat, those that fail his Elseworld test would be destroyed.

As it was seen when he destroyed Earth-90 using the Book of Destiny, a book used to reshape or change reality. He would then travel to Earth-1, where he gave the Book of Destiny to Doctor John Deegan to create two Elseworlds. He used it to switch the lives of Green Arrow and The Flash.

Green Arrow made a deal with Mar Novu to spare the Flash and Supergirl as they attempted to stop Deegan from destroying reality, which Mar Novu agreed too but would soon come with an unknown price. Mar Novu then gave Green Arrow a metaphysical arrow that is capable of destroying the book and returning reality to normal.

After the heroes defeat Deegan, Mar Novu left Earth-1 knowing that they passed his test, and would soon have to prepare for the upcoming threat. 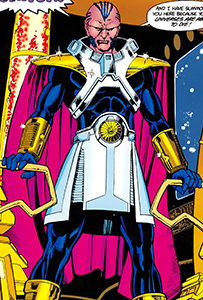 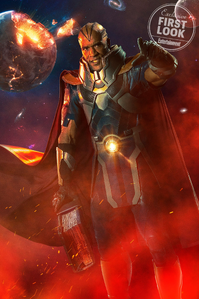 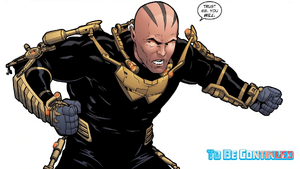 The Monitor Ray-Lan in the Smallville Season 11 comic.