Give people and animals nightmares with the nightmare juice (succeeded briefly, but then failed).

Monkeybone is the titular main antagonist of the 2001 film of the same name.

He is a raunchy, rascally monkey created by the film's main protagonist Stu Miley.

He was voiced by John Turturro, who also played Mo Flatbush in Mo Better Blues, Jesus Quintana in The Big Lebowski, John Shooter in Secret Window, the Rat King in The Nutcracker in 3D, the Goat in Green Eggs and Ham and Carmine Falcone in The Batman, portrayed by Brendan Fraser.

When Stu Miley fell into his dream world, he met Monkeybone as another villain named Hypnos (Monkeybone) plans to use Stu's body to get a chemical substance that a woman named Julie McElroy developed that gives people and animals nightmares known as the Oneirix.

Upon being sent to the institute by Hypnos upon reminding him of his mission, Monkeybone (in Stu's body) ends up successfully stealing the Oneirix switching it with another juice. Monkeybone obtains the Oneirix and puts it inside stuffed monkey toys of himself (Monkeybone) so that those who touch them will be infected and given nightmares.

With help from Miss Kitty, Stu escapes from his imprisonment. Monkeybone in Stu's body prepares a piñata for the Monkeybone farting dolls at the party.

Meanwhile, Stu reveals Hypnos' plan to Death and convinces her to send him back for only an hour, only to find himself in the body of a dead athlete organ donor. As he flees the morgue attendants, Stu finds out about Monkeybone's planned party and heads there with the extractors still in pursuit.

At the party, Stu's agent Herb exposes himself to the Oneirix in the Monkeybone doll and ends up seeing in the mirror that his clothes are coming to life. This causes Herb to run through the party naked, telling everyone that the clothes have come to life and turned evil. After that, Monkeybone in Stu's body tells everyone to forget about it as he brings down the Stu piñata containing the Monkeybone Dolls.

Back in Downtown, Stu and Monkeybone are falling toward Down Town where the residents cheer on their fight. Just then, all of the rides stop and a giant robot emerges near the Revive-O causing everyone to flee the area. When Stu and Monkeybone are caught by it, the operator of the robot is revealed to be Death who seems quite cheerful despite the circumstances. Monkeybone tries to have Death let him go to the bathroom, but Death places Monkeybone back in Stu's head which is where he belongs.

Stu Miley created Monkeybone to be the opposite of his introverted, shy, and sexually dormant self. As shown in the film, Monkeybone is that of a loud mouthed, mischievous, and highly sex-crazed little monkey who takes pleasure in embarrassing Stu whenever possible just to annoy him. A big part of his character is how sexually devious he is, often taking every advantage to be raunchy or lecherous toward women, to the point of making crude comments about Stu's girlfriend, Julie. Monkeybone is also shown to be quite the attention seeker, mostly due o him being used to entertaining citizens of Down Town.

After stealing Stu's Exit Pass, Monkeybone's true colors are revealed, being that of a backstabbing, selfish, mean spirited , and manipulative egomaniac who used Stu in order to steal his body while secretly working for Hypnos. He in actuality despises Stu, craving a life of his own instead of being a mere figment of Stu's imagination. Monkeybone see's himself as a highly beloved character, taking extreme love for his own merchandise while Stu dislikes it.

Monkeybone has shown to be extremely cowardly when he is confronted on his devious actions, shown with his extreme paranoia of Stu's "Back in the Pack" punishment for him which involves being shoved into a backpack to shut him up. Monkeybone is also shown to have extreme fear of Death and anything associated with her such as Reapers, mostly due to them acting as a high level of authority in Down Town above Hypnos. [1] 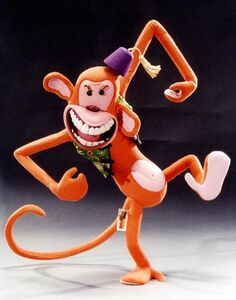 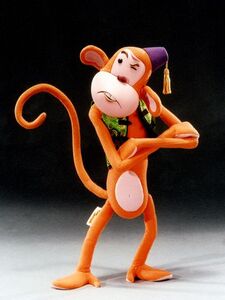 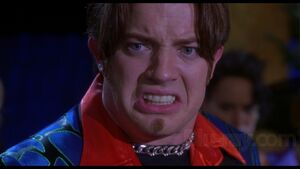