Powerful armor
Horn
Ability to shoot fireball out of their mouths

In the third episode the DigiDestined saw two Monochromon that surrounded them and the two Monochromon fought, for their territory, until they fell into the ocean. In the Etemon Saga, a Monochromon was used to pull Etemon's transportation. A bunch of Monochromon were seen outside of Datamon's Pyramid who got sucked into the vortex of Etemon's Dark Network with the Tyrannomon and Gazimon because of Datamon shooting his attack into it, hoping to kill Etemon.

A Monochromon was the first Digimon that the new DigiDestined encountered that was under the control of one of the Digimon Emperor's Dark Rings. He attacked the DigiDestined when they found the Digi-Egg of Courage and chased after them when they fled. He then engaged Flamedramon in a fight and was freed from the Dark Ring by his "Fire Rockets".

Eventually another DigiDestined by the name of Rosa has a Gotsumon, that can Digivolve into a Monochromon. 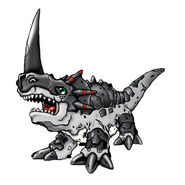 Retrieved from "https://villains.fandom.com/wiki/Monochromon?oldid=2992392"
Community content is available under CC-BY-SA unless otherwise noted.