Monsieur Mallah is the secondary antagonist of the fifth and final season of Teen Titans.

He was voiced by the late Glenn Shadix in the original series, who also played Brain in the same series.

In the episode "Hide And Seek", Mallah was sent to kidnap Melvin, Teether, and Timmy, the three heroic kids that Raven was protecting. He attempts to get away in a vehicle armed with lasers, but Melvin's imaginary (but now visible) friend, Bobby the bear arrives to attack and defeat the villainous gorilla, forcing Mallah to retreat.

In the final battle in "Titans Together", Mallah attempts to get away with The Brain, but Robin and Beast Boy stop them just in time. Beast Boy finished him off and in the end, he was frozen along with the other frozen villains and his gang. 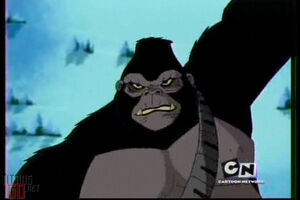 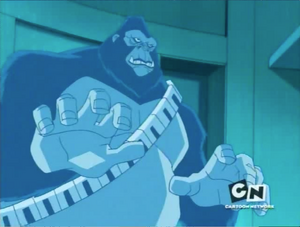 Monsieur Mallah's defeat
Add a photo to this gallery

Retrieved from "https://villains.fandom.com/wiki/Monsieur_Mallah_(Teen_Titans)?oldid=4156930"
Community content is available under CC-BY-SA unless otherwise noted.