Big Bad
Monsieur Mallah is a major recurring villain from Teen Titans Go!. He is a French gorilla, with advanced skills in military warfare. He works as the sidekick of The Brain and is a member of the Brotherhood of Evil.

In "Brian", Monsieur Mallah spotted the Little Buddies, when they were trying to sneak into The Brain's tower to free the currently imprisoned Teen Titans. It wasn't too hard for him to find said Little Buddies since Beat Box started playing extremely loud party music and flashing bright colorful lights. Monsieur Mallah shot them all with his gun and then trapped them all in a big cage, which he carried on his back, hauling them to the same prison, where the Teen Titans were.

Before Monsieur Mallah could get the Little Buddies to the prison, they broke out of the cage and started beating the snot out of him, until they officially knocked him out cold.

In "40% 40% 20%", Monsieur Mallah accompanied The Brain in capturing the Teen Titans. When Cyborg busted in to save the day, Mallah smacked him with his gun, knocking him down. Cyborg got back up and knocked Mallah out cold.

In "Shrimps and Prime Rib", Monsieur Mallah helped The Brain with his evil plans.

In "The Streak", Monsiuer Mallah appeared during a montage, committing a crime on his own and getting defeated by the Teen Titans as part of their crime-stopping streak.

In "Flashback", Monsieur Mallah was one of the first villains to face Robin, when he first started being an independent superhero. He blasted up the whole city with a bazooka.

In "Them Soviet Boys", Monsieur Mallah taught a French class. 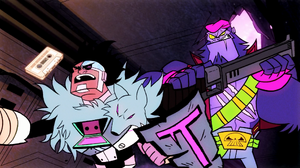 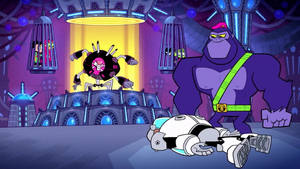 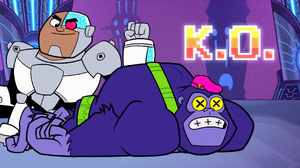 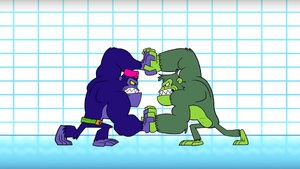 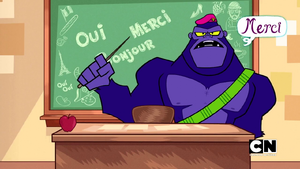