Monsoon is the son of Akakabuto and the main antagonist of Ginga: The Last Wars.

Monsoon is sometimes clumsy in movements and may become tired. In addition, Monsoon is very clever and cunning, as is his father, but unlike his father, Monsoon is not only trying to kill his enemies, but also wants to torture them.

Monsoon hates dogs, especially Ōu's warriors, because of their traumatic past. Despite its enormous size, strength and self-confidence, he is sometimes experiences fear, for example, seeing a dog run towards himself. As a result of trauma, Monsoon feels great pleasure in hurting the dogs and he developed very cruel and sadistic.

Monsoon is a very unique bear.

It is said that his size was due to his burning hatred of the Ou Army and his continued training to grow stronger to defeat them. His kin are a lot smaller than he is, as he towers over them.

Monsoon has two scars across his left eye and his left arm is much larger than his right arm due to him being born left handed and constantly using it in battles, which made it grow to an enormous size.

The fur covering his left arm is golden, a trait not seen in any of his other family members.

Monsoon was born on the Futago, but the bears were persecuted because they were related to the Akakabuto. When Monsoon was still a cub, his family tried to escape from Futago, but Ōu's warriors rode them and John killed Monsoon's brothers. His mother were killed while remaining in the fight against dogs to give Monsoon the opportunity to escape. Monsoon fled in horror and a traumatic event left him to the end.

Monsoon came to Shirakami-Sanchi where he met other bear cubs. Bear cubs were also orphans and Akakabuto's children, but they had a different parent than Monsoon. The bear cubs decided to stay together and they stayed in Shirakami-Sanchi. The years went by and the bears were hiding. Life was hard and some of the bears died, but they also got their own offspring. Over the years Monsoon grew really big and became the leader of bears. Left-handed, he was really strong in his left paw.

One day, young Monsoon found a wood box with a six abandoned puppies. Monsoon smelled the smell of puppies and fled fast farther after opening the box. The innocent puppies were grateful and followed the giant fence without fear, so the embarrassed Monsoon was preparing to hit them. The puppies avoided the attack, as Monsoon landed beside the puppies and then fled to the back of the tree. Tired and confused puppies were lying in the ground. Monsoon did not dare approach them, but slowly his fear began to turn into hatred. Suddenly Monsoon's half-brothers came to the scene and were preparing to kill the puppies for Monsoon, but Monsoon told them to stay sideways. Monsoon approached puppies, so one of them would see this puppy starving. Monsoon was furious about it, hopping in the puppy's air and crushing it in the moment. The fear of the bear became delightful and began to play with puppies, stomping their hefty bodies with lightly huge nails. When the wives wanted to participate in the play, Monsoon shouted at them. He reported that the puppies belonged to her and that the other bears were not touched by them. It pulled Bob and his siblings back into the box and took them along, deciding to make them their own playthings.

Monsoon tortured puppies, including tearing off one eye and one front leg. He also put them to fight with each other. Finally Monsoon ate the puppies, believing that eating dogs would increase their size. Only Bob stayed behind, as Monsoon enjoyed his manipulation and the dog was left with permanent scars of physical torture. Bobby grew up under Monsoon, but he never dared escape from the bears.

15 years later, Monsoon still felt anger and fear of Futago and Ōu's warriors, but year after year he felt more hate than fear and ultimately decided to take over the Futago.

He attacks Futago with over 20 aides and bears both wound and kill several dogs. The bears attack from all directions, but retreat when they hear Gin's cheek, which causes them anxiety and fear. Monsoon appears on the border of the forest and sets his subordinates, when the warriors of Ōu see it and are shocked by its size. The bears retreat and hide when Daisuke and Hidetoshi arrive on the helicopter but continue to attack as soon as people leave.

Gin decides to act as bait to give the flock an opportunity to escape and attack the bears. Nearly blind Gin separates the bears just as dark characters and attacks Zetsu Tenrō Battōga towards Monsoon. Monsoon initially fears the past as a result of the events, but then rejects the blow with a huge front gun and the impact of the attack is damaging Gini. The bear strikes Gin on the ground and facing the rock. Most of the warriors of Ōu attack fast and furiously to support Gin, but they are not opposed to Monsoon, who starts barking dogs in front of Gin's eyes and kills Jaguar and Saburò in an instant.

Gin runs into the woods and attracts Monsoon and some of his subordinates. They end up on the edge of the gorge and Monsoon hopes to get Gin to feel the same fear Monsoon himself felt as a puppy for Gin. Gin finally decides to attack the bears. He avoids Monsoon and attacks the giant peasant, at the same time Hiro arrives at the spot. Gin recognizes Hiro's voice and Monsoon's attention is also attached to Hiro. Gin gets a grip on the bear's neck but crushes it under his chin. Hiro is, of course, still alive. Monsoon shakes Hiro out of his nails and the seriously injured dog falls to his back on the ground and can only crawl. Gin has to take off from Monsoon and try to protect Hiro from Monsoon. However, uninhabited bears are not against Gin and Gin tries to attack Monsoon himself. Monsoon shakes Gin and the dog gets deep bits to his right cheek and chest. Monsoon will try to hit Gin with his big tassel, but Hiro succeeds in his last efforts to jump in and get a new hit. The bear's blow drops both dogs on the river that flows into the ravine. Monsoon throws big stones behind them and rocks in triumph. After that Monsoon returns to dogs and other bears.

Monsoon asks Bob what he was talking to dogs. Bob explains to Monsoon that most of the dogs in the slaughter list are already dead. Monsoon looks at the dogs and notices Ken, who thinks of Ben, and Kurotora, who is also one of the dogs on the list. Seeing dogs will keep Monsoon remembering the horrors of the past and starting to shake. Monsoon asks where John is, for he hates his brother's most knocked John. Tesshin truthfully answers that John is dead. Monsoon is silent for a moment until she begins to roar on the sky, realizing that he can not take revenge for his worst enemy. He experiences the anger and fear of all trauma, and jumps into the air towards the dogs. He chooses Musashi for his sights, but Kurotora jumps between and tells the bear how his brother Akatora took the only eye to Akakabuto. Monsoon strikes Kurotora on his right shoulder and seriously injured Kurotora falls outside the sacred ring near Jerome.

Dogs and bears begin to fight when Jerome and Musashi go to Monsoon. Monsoon notices Cross, Maru and Sunny escaping, and commands Bob after them. Cross throws Bob easily on the ground where Monsoon remembers that Cross is possibly one of the former commander and tells Bob to kill Cross if he does not want to be killed himself. Monsoon then put Jerome behind him and punch Musashi with his nails. Monsoon injure dogs one after another and Monsoon seriously injures Kōga Elder, Tsukikage and Toshimitsu tried to run for help. All Ōu warriors have been beaten and Monsoon rocks in triumphant ways as the dog's paradise collapses.

The bears build a stone barn in a prison where they bring all the Ōu warriors they have found. Bears do not hunt dogs right away, but like them in their playfulness and food quarrel. Monsoon helps his subordinates to capture Mel and later noticed the Kyōshiro.

Subsequently, at night, on the southern side of the Futago slope, the inquiries made by Nyūdōunsai Sanada, Setsuma and Tsubakuro are subject to Monsoon's three under attack. Dogs are scattered and Monsoon undergoes hunting under the bush, while Monsoon himself snoops behind a dog. 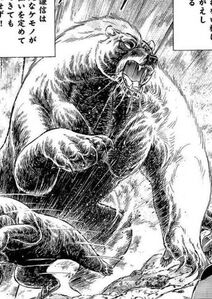 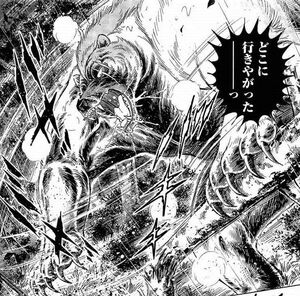 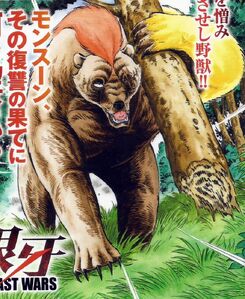 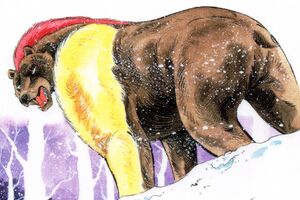 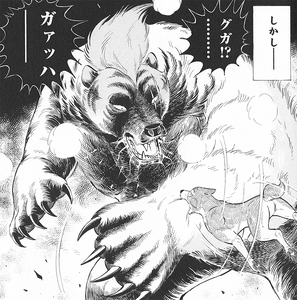 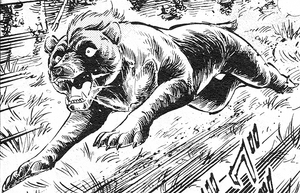 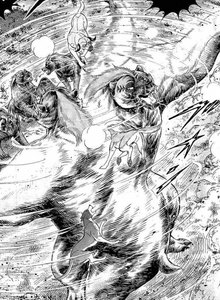 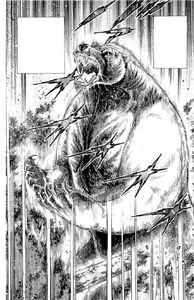 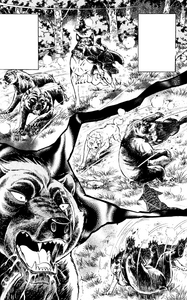 Retrieved from "https://villains.fandom.com/wiki/Monsoon_(Ginga:_The_Last_Wars)?oldid=3187679"
Community content is available under CC-BY-SA unless otherwise noted.