Ability to melt and solidify themselves
Possessing guns that shoot into a person's brain to steal their abilities
As Monstars:
Amplified strength, endurance, reflex and agility to superhuman proportion
Enormous size
Superb coordination
Devastating physical strikes and blows
Aggression

Mutated Aliens
The Nerdlucks, also referred to as the Monstars, are the five central antagonists of the 1996 Warner Bros. hybrid film Space Jam. They are a quintet of aliens who work for their evil galactic carnival worker Mr. Swackhammer.

Pound, who stole Charles Barkley's talent is the overweight orange leader of the Monstars. He is bossy, demanding, mean-spirited, and takes pleasure in bullying Michael Jordan and the Looney Tunes characters. He speaks in a very deep voice.

Bang, who stole Patrick Ewing's talent is the green second-in-command of the Monstars. He is very tough and aggressive. He has a large chin, small dragon-like ears, spikes on his back and a red orange flat top. He enjoys insulting Michael Jordan and picking on the Looney Tunes. He has the ability to breathe fire and speaks in a deep, growling voice.

Bupkus, who stole Larry Johnson's talent is the buff purple Monstar. He has dark purple hair, and he is very emotional and cocky. He enjoys mocking Michael Jordan and hurting the Looney Tunes. He speaks in a suave deep voice.

Blanko, who stole Shawn Bradley's talent is the tall blue Monstar. He has dark blue hair, pointy ears, and a buck tooth. He is dimwitted and more laid-back than his teammates. He is friendly to Michael Jordan and Tweet and speaks in a thick Californian accent.

Nawt, who stole Muggsy Bogues's talent is the short red Monstar. He is smart and hyperactive and speaks in a high voice.

The Nerdlucks first appear when Mr. Swackhammer is trying to attract more customers to his theme park on Moron Mountain because he is losing money. During his rant, he suggests something funny, wacky, and nutty when he suddenly sits on his remote control in which a library of Looney Tunes shorts start playing on his TV screens, Bupkus and Nawt point them out and he agrees with them so he sends them to Looney Tune Land where the Looney Tunes reside.

They encounter Bugs Bunny and Elmer Fudd accidentally landing on Elmer in the process. They interrogate Bugs and ask him the whereabouts of Bugs Bunny because they have no idea what he looks like. He describes himself to them in one of his classic routines and they agree with the descriptions and he tells them that he never heard of him which disappoints them. Bugs remarks to himself "you know maybe there isn't any intelligent life out there in the universe!". At this point they figure out he is the Bugs Bunny who they're looking for and they shoot him with their laser guns and tell him to come with them.

That night, Bugs holds a town meeting with the other Looney Tunes and tells them that they will be enslaved by the Nerdlucks. They laugh when they hear the Nerdlucks talk because they look and sound small and weak so they send Yosemite Sam after them. They shoot him with their laser guns frying him and knocking him unconscious. Now terrified they raise their hands in surrender. Bugs decides to negotiate with them telling them "The rules of kidnapping a cartoon character".

He then holds a meeting with Daffy Duck, Porky Pig, Elmer Fudd, and Sylvester after much discussion. They decide to have a basketball game to decide their fates because they think they have the advantage. After all, the Nerdlucks are too small. Little do they know the Nerdlucks can melt themselves and shoot into a person's brain to steal their abilities. Using this, they steal the talent from Charles Barkley, Patrick Ewing, Larry Johnson, Muggsy Bogues, and Shawn Bradley and place the stolen talents into a basketball. Later as they prepare to train. Daffy sarcastically tells them since they are performing poorly "they need to practice growing taller".

They then take out the basketball and transform into gigantic monsters now calling themselves "The Monstars". After trashing the court, Bugs decides that they may need a little help, so they abduct Michael Jordan while he's golfing.

After some coaching and training, he decides to help them in the game. At first the Tune Squad does poorly against them and is off by many points until Bugs pretends to take steroids which is water to improve their skills.

After the Monstars start trailing Swackhammer tells them to play more aggressively which they do, send most of the Looney Tunes to the hospital, the only remaining players are Bugs Bunny, Daffy Duck, Lola Bunny, and Michael Jordan, Bill Murray eventually comes as a replacement and through the power of cartoon logic. Michael Jordan can stretch his arm long enough to score the winning points.

Swackhammer tells them that they are a bunch of losers and will never amount to anything. Bugs and Michael ask why they take that from him, and they reply "He's bigger than...we used to be!". After stating their comment, they realize that they are bigger than Swackhammer and, having had enough of their abusive boss, they turn on Swackhammer, and strap him to one of Wile E. Coyote's rockets sending him to the moon.

Afterward with some hesitation, they agree to give back the basketball player's talents and revert to their Nerdluck forms. They then decide to live with the Looney Tunes.

After their transformation, they stood tall smiling evilly at the Looney Tunes and their high voices became deep and resounding. Blanko scared Porky Pig by saying "Boo." They felt cocky of their new size, and as they chuckled evilly, Bang picked up the ball and mocked that its time to play a little basketball and slams the ball to the ground that destroyed the court.

When the Monstars showed up at the gym, they start picking on Michael, calling him names, and Pound made him into a shape of a basketball and passes him to Nawt and dribbles then he passed him to Bang and slam dunked.

Pound remarks mockingly to the Looney Tunes about Michael and the Monstars laugh at Michael. Then Bang insults Michael by calling him baldy then Tweety comes to Michael's defense but gets flicked to the wall by Bang hurting him. When Michael picks Tweety up he asked if he's okay and Blanko also asked in concern then Bang and Bupkus glare angrily at him not wanting him to be friendly. After Tweety got hurt by the Monstars, Michael decides to play basketball with the Looney Tunes.

Later at the basketball game, the Monstars started to cheat and play rough to get their hands on the ball, so they can win. During half time, the Monstars' boss, Mr. Swackhammer, showed up for pep talk then they discovered Stan after he snuck into the Monstars' locker room.

When Michael makes the final shot, he is grabbed by Bupkus and Bang, trying to stop him. The Tune Squad won the game and the Monstars lost. Swackhammer was furious and berates them for losing the game, then Swackhammer angrily stomped on Bupkus's foot which causes him to howl in pain and he demands them to get in the spaceship. Michael asked them why they put up that kind of abuse. They then realize now that they're larger than Mr. Swackhammer, they quickly turn on him, tying him in a rocket, sending him to the moon.

Michael requests for them to give the skills back to their rightful owners, which would undo their transformation. Pound sadly asked if they have to and Michael reminds them it was part of the deal they reluctantly agree to do so. They sadly placed their hands on the ball, which reverts them into the Nerdlucks.

Their only other appearance to date has been a cameo in the Pinky and the Brain special "Star Warners" as the patrons at the cantina bar.

The Monstars are humanoid muscular aliens who wear navy blue basketball uniforms with gold trimlines, white zeroes on the front and on the back, white socks and navy blue sneakers, five fingers and pointy claw-like fingernails.

The Monstars are cocky, dangerous, intimidating and formidable individuals who act like bullies around Michael Jordan and the Looney Tunes. Despite this, they are rather clumsy as shown by the amount of times they tripped during their basketball duel with the Looney Tunes, giving them many advantages to score points, which is what ultimately caused the Looney Tunes to win. Like in their Nerdluck forms, they are scared of Mr. Swackhammer and they are still loyal to him trying to please him. However, after they lost the game, they are tired of being mistreated then they turn on Mr. Swackhammer and got rid of him by strapping him to a rocket then they had a change of heart. They are also childish when they are reluctant to give the NBA players' talent back. 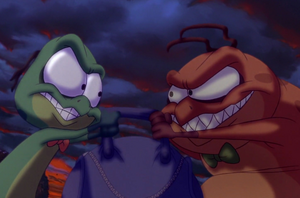 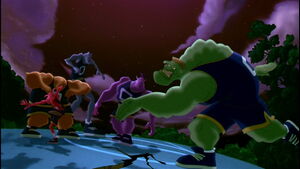 Bang causing an earthquake after slamming the basketball to the ground, much to the shock of the other Monstars. 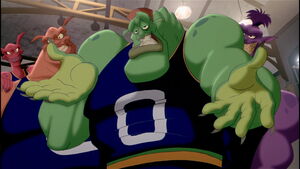 Bang smiling tauntingly at Michael Jordan while calling him chicken. 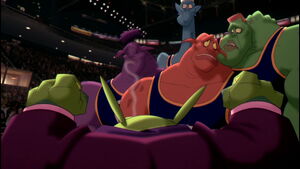 Monstars feeling ashamed as Mr. Swackhammer furiously berates them for losing the game. 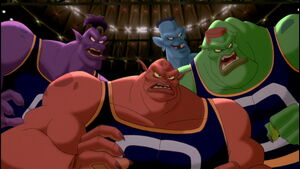 The Monstars glaring furiously at Mr.Swackhammer. 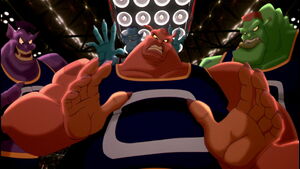 Monstars reaching for Mr. Swackhammer as they turned on him. 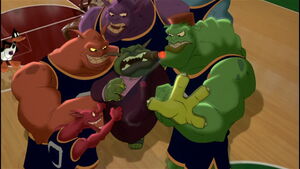 The Monstars furiously seizing Mr. Swackhammer.
Add a photo to this gallery

Retrieved from "https://villains.fandom.com/wiki/Monstars?oldid=4297343"
Community content is available under CC-BY-SA unless otherwise noted.