Guardian of the Hospital

Monster 4 is the fourth guard in the Karamari Hospital DLC for the game Spooky's Jumpscare Mansion and encounterable in the Endless Mode.

Monster 4 appears to be a human with bandages around its head. Its eyes are invisible while a mouth can be seen with sharp teeth. It is only wearing a simple white hospital robe, while its hands appear to be long and its nails appear to be very sharp.

Monster 4 appears in the basement zone with the Monster 3. It is first seen hanging from a noose in a room, flickering in and out of visibility. Once the player picks up the key to the Isolation Room, it would totally disappear from the noose and the music would stop. Entering the next room will begin the chase with Monster 4 appearing behind the player.

Monsters 4's movement is identical to Specimen 6, both only moving when the player is not making eye contact with them. It also teleports by itself and attacks the player if the player stares at it for too long. It also always spawns behind the player during its chase. The only exception is that while looking at it, Monster 4 slightly moves at a small pace.

If the player dies to Monster 4, they are brought to a death screen showing Monster 4's head violently shaking as the imagery in the background rapidly changes. A poem shows up that reads:

"Dark worms scream inside my brain.
Begging me to eat again.
Hearts, and blood, and bile, and soil.
I must consume to end turmoil."

In the Endless Mode, Monster 4 is very similar to the Karamari Hospital, except it now has the ability to create hallucinations towards the player and when killing the player, it has its own death screen. Before starting the chase, hallucinations would appear a few seconds, when starting to get chased fog and clouds will appear in front of the player.

In the HD Renovation, Monster 4 no longer causes a foggy hallucination. It also has a starting room that mimics its starting room from the Karamari Hospital. It can also be struck with the axe or sword, which not only makes it disappear from the current room, but also deducts the chase duration by a room. 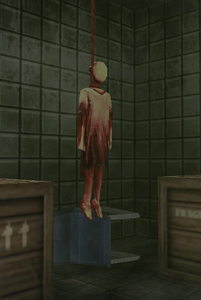 Monster 4 before chasing the player. 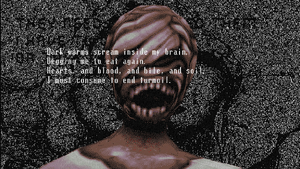 Monster 4's death screen.
Add a photo to this gallery

Retrieved from "https://villains.fandom.com/wiki/Monster_4?oldid=4010458"
Community content is available under CC-BY-SA unless otherwise noted.