Maze Guard of the Hospital

Reside in it's maze.

Monster 5, also known as the Ghost Cow, is the fifth guard and main antagonist of the Karamari Hospital DLC for the video-game Spooky's Jumpscare Mansion and an encounterable enemy in the Endless Mode.

It was voiced by Roxy K.

Monster 5 appears to be a huge-bull creature without any hair. The creature's mouth appears to be very grinning wide mouth and little reddish eyes. Its legs appear to be bent down. Connecting to the creature's stomach is a huge lipped mouth with sharp teeth and a singular red eye pupil coming from it. From behind, it looks like the Monster 5 has some spider resembling body as well.

Monster 5 appears as the final entity in which the player much escape its huge maze in the Isolation Room. It is not moving instead it would instantly teleport by itself towards the player. It has the ability to teleport very fast but cannot teleport through the walls.

When the player escapes its maze and grab the keys to the exit door, they will have completed the whole Karamari Hospital game.

Should the player die to Monster 5, a death screen shows a realistic brain with red coloring in the back. a Text appears that reads:

Monster 5 also appears in the Endless Mode in which it can teleport through walls and cause rapid visions towards the player, making it much difficult for the player to escape Monster 5 then before. The background of the rooms is replaced with metal bars, resembling the Isolation Zone maze. Monster's 5 chase theme also got replaced with a new one in the Endless Mode.

In the HD Renovation, hitting Monster 5 with the axe or sword causes it to teleport to the beginning of the room, reducing a room from its chase duration. 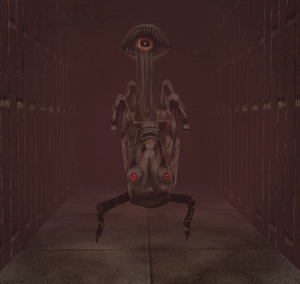