Guardian of the Karamari Hospital

Waiting for the player to murder it.

Monster 6, also known as Bekka, is the secret sixth guard of the Karamari Hospital DLC for the video-game Spooky's Jump Scare Mansion and an encounterable enemy in the Endless Mode.

She appears to be a very-tall pale skinned woman. She has an unnaturally wide smile, very long black hair and empty eye-sockets. She wears a dark-black long pattern covering her whole body. While her hands are black colored and blood appears on the hands and on the pattern.

As mentioned, Monster 6 is a secret monster found in the basement of the hospital with Monster 3 and Monster 4. She is only possible to be encountered in the endless corridor. The player keeps going into the corridor until the player comes to the end where Bekka is waiting for him. Once the player gets close enough to her, she will instantly rush towards the player and murders them instantly. Her death screen shows a flashing closeup of her face with a quote that reads "Don't get up before Saturday."

Monster 6 also appears in the Endless Mode. When being chased by her, foggy-dark overlay appears around the player. She inflicts a lot of damage to the player and has no endings in her attacks.

In the HD Renovation, Monster 6's chase in Endless Mode is changed completely. Her starting room is identical to the endless hallway in Karamari Hospital, except there is an exit with a door at the end. She no longer appears from the door behind the player, but rather at the exit door, where she will emerge and attack the player when they approach it. She will chase the player until they either exit the room or if enough time passes where she disappears with a screen flashing black. Because she only appears from the first exit door the player approaches, rooms with multiple exit doors allow the player to easily escape from her. 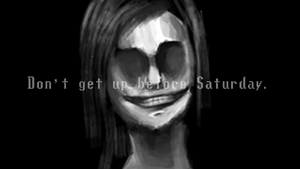