Killing whomever he comes across.

He was voiced by the unaccredited Richard Steven Horvitz, who has also voiced Zim from "Invader Zim", Kaos in the Skylanders franchise, Sheshou in Mulan (1998 Version), Lugosi in Bunnicula, Crayon Boy in Codename: Kids Next Door, and Moxxie in Helluva Boss.

The Monster Convict is first seen when Jackknife is running away from Jailbot and he decides to try and hide in a shack in a field. In a brief amount of time, The Monster Convict manages to cut off Jackknife's face and turn it into a mask, then tie him up on his wall so he could dissect Jackknife later. However, Jailbot arrests The Monster Convict thinking that he was Jackknife due to his face mask and takes him to SuperJail, leaving Jackknife behind tied to the wall.

Immediately after arriving, all of the other prisoners and staff are absolutely terrified of The Monster Convict. When The Monster Convict goes to the cafeteria, everyone does their best to avoid him, except those stuck in the food line. When a lunch lady turns her back on him to get his food, he manages to effortlessly kill and mutilate at least eight other inmates, and then the lunch lady when she turns back around by impaling her in the head with a soup ladle.

Watching this all unfold on security cameras, The Warden of Super Jail is disgusted and insulted at how much fear and respect The Monster Convict has gotten in only one day after arriving while hardly any prisoners take him seriously at all. Jared tells the warden how he lived by himself next to a graveyard to eat and turn some of the bodies he stole into furniture such as lamps and a couch. The Warden then decides to send Jared undercover as a prisoner to spy on The Monster Convict.

As Jared searches his room, several newspaper clippings on the walls tell horrifying stories of the Monster Convict mutilating people, such as stealing a man's face while he was alive and then leaving him for dead, and killing whomever he comes across. When Jared is forced to go into the Monster Convict's room, he doesn't notice him sneaking up on him with a knife. Fortunately for Jared, he slips on a puddle of blood and accidentally stabs himself in the head, apparently dying.

His body is moved to Superjail's freezer, where Alice later tries having sex with his body, but freezes to death with him. Sometime after this, the Monster Convict managed to resurrect once again and presumably went right back to his usual habits of killing anyone he wants in the maximum security block and using their bodies to decorate his cell.

The Monster Convict makes a cameo having somehow survived and/or resurrected. He takes part in the race with his own car, with a convict crucified to the front, though he's not seen again in the episode and it can be assumed he didn't win the race.

The Monster Convict makes his final cameo appearance in this episode. He's briefly shown inside of his cell which he's turned into what appears to be a living room of sorts while eating someone's arm with a sandwich, before a tornado crashes through and destroys everything in his cell, which was being controlled by The Warden's malfunctioning weather machine. After this, he's never seen or heard from again, and it's unknown if he was killed or not during the chaotic weather attacks caused by "Sunshine". However, even if he was killed once again, it's more than likely he would've eventually came back to life.

The Monster Convict has earned his nicknames for many reasons. For starters, he's one of the tallest inmates in all of Superjail, easily standing a good foot or two over most other inmates and staff. He's also one of the most physically strong, able to effortlessly rip fully grown men apart with his bare hands as if they were nothing but toys.

One of him most intimidating features is his entirely pitch black and soulless eyes. He's also noticeably balding when he's not wearing a mask made from someone else's face and he also has a cleft lip.

The Monster Convict is a completely emotionless and heartless murderer who effortlessly massacres everyone he comes across for entirely unknown reasons and likely no reason at all. Given all the stories told through newspapers and how violently his victims were killed, the Monster Convict is incredibly sadistic and cruel, seemingly wanting to be as violent as possible, even more so than most other Superjail inmates to the point of horrifying even them. One major thing that separates him from all the other inmates, is the fact that he's the only inmate in the entire prison who's been shown to be a cannibal.

Even after being arrested and sent to Superjail, the Monster Convict didn't appear angry or even seem annoyed from being taken from his home. It could be theorized that the only things the Monster Convict cares for is fulfilling his bloodthirsty fantasies and surviving day to day, since after he was sent to the maximum security block in Superjail, he wasted no time in continuing his reign of terror by killing anyone he came across and decorating his own cell with their corpses. 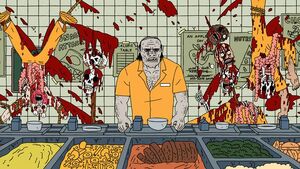 Only some of The Monster Convict's handiwork. 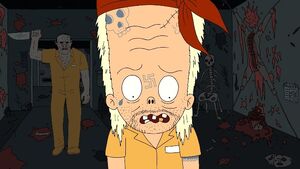 The Monster Convict sneaking up on Jared. 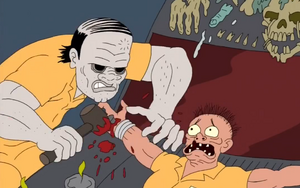 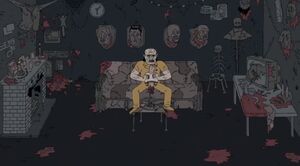 The Monster Convict's cameo in "Superstorm!".