Jayce and the Wheeled Warriors

Unnamed planet where Audric's laboratory is

Stealing each others' thunders

Bio-Engineered Mutant Imperialists
The Monster Minds are fictional evil races bent on conquest of the universe, and are the major antagonistic force in 1985 cartoon series and toyline Jayce and the Wheeled Warriors. They are led by the very first of the Monster Minds, Saw Boss. They possess the ability to turn into armed vehicles.

The Monster Minds are originally engineered by a botanical scientist called Audric, who had intended to use his expertise in botany to solve the problem of starvation across the universe. However, during one of Audric's experiments, a star went supernova and scattered radiation across the system. The plants in Audric's laboratory were affected by the radiation and mutated into cunningly intelligent and vicious humanoid creatures. Thus, the Monster Minds were born with the ability to transform into various armed combat vehicles.

After driving Audric from his laboratory, the Monster Minds set out on a mission to conquer the universe. Using ever-growing Expansion Vines, they extended their field of influence across multiple star systems. Audric went into hiding and was able to create a special magic root capable of destroying the Monster Minds. However, he knew that his creations would come after him and try to destroy the root, so Audric split the root in two, giving one half to his cowardly robotic squire named Oon to pass on to Jayce, who is Audric's daredevil son. Audric disappeared across the stars, but Jayce and his Lightning League vowed to find him and unite the magic root in order to put an end to the Monster Minds' reign of terror.

The Movie: Fate that Never Came

Due to less-than-successful rating and toy sales, the series' 65 episode runs were not extended, and the series ended inconclusive. However, a movie had been planned along with the series, following in the footsteps of other toy-based animated series such as Transformers and G.I. Joe; if the series had proven successful by increasing toy sales, production would have begun. But due to the failure of the toyline, preparation for the movie was shelved.

Had the movie been filmed, it would have provided a finale for the series, with Jayce and his Lightning League meeting the original Lightning League and being trained on the home world of the Guardians. Jayce would be reunited with his father Audric, but Audric would be killed by Saw Boss as the Monster Minds began a final assault on the galaxy, and in a climactic final battle, Jayce would unite the root and destroy Saw Boss and his legion of Monster Minds, ending the Monster Mind menace forever.

Generally, Monster Mind battles are carried out by clones of the main Monster Minds that are grown from vines. These clones are referred to as "troopers"; Saw Trooper, Terror Trooper, K.O. Trooper, etc. The true Monster Minds change from their humanoid forms into vehicles upon leaving their headquarters, although they are significantly larger and more powerful than their mass-produced clones. In addition to their laser arsenals, Monster Minds' primary weapons involving their extendable limb vine attached on top of them when in vehicle forms.

Saw Boss is the leader of the Monster Minds, and the very first Monster Mind to be born. Commanding legions of cloned minions and Expansion Vines, Saw Boss is bent on conquering the entire universe, launching attacks on every known inhabited planet. The only opposition to his conquest are the Lightning League, a group of heroic space travellers led by Jayce, the daredevil son of Saw Boss' creator Audric. Before going into hiding, Audric left behind one half of a magical root supposedly capable of destroying the Monster Minds. Recognising the root as a threat, Saw Boss is determined to hunt down the Lightning League and destroy Jayce's root before he can find Audric and the root's other half. 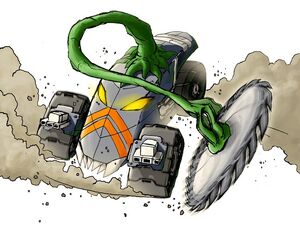 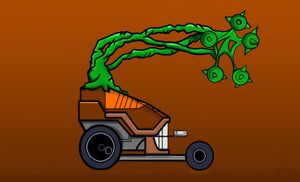 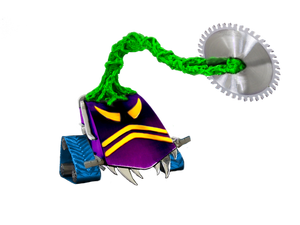 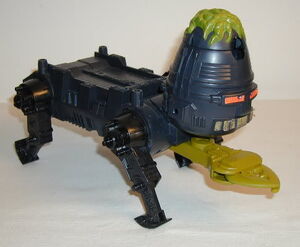 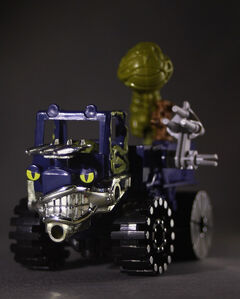 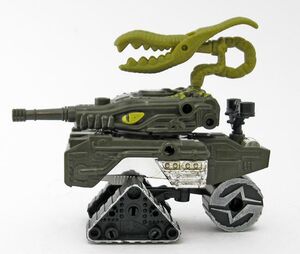 Add a photo to this gallery
Retrieved from "https://villains.fandom.com/wiki/Monster_Minds?oldid=3486809"
Community content is available under CC-BY-SA unless otherwise noted.