Earth (created in the Indian Hill facility underneath Arkham Asylum)

Get revenge on Doctor Hugo Strange and Peabody.

Former Arkham Asylum inmates, calling themselves "Monsters" due to the powers they obtained while being experimented on, are villains in the second and third season of the television show Gotham.

Secretly, Hugo Strange, the director of Arkham Asylum, is experimenting on various inmates of Arkham Asylum in a secret laboratory underneath Arkham, under the direct orders from the Court of Owls. There, he searches for a way to bring people back to death, which eventually succeeds when he brings back Theo Galavan, who he brainwashes into believing to be the ancient warrior Azrael. Realizing that the people he returned from death need a new identity in order to thrive, Strange begins creating new identities for the people he brings back. He also starts mixing the DNA of his experiments with other DNA, resulting in various powers obtained by the experiments.

However, the revived Fish Mooney, who has returned with her memories intact, hijacks a transporter supposed to deliver some of Strange's experiments to another facility. The truck crashes inside Gotham and the experiments are freed, venturing into the city on their own.

Six months later, most of these experiments have joined Fish's gang. The citizens of Gotham are horrified of the monsters inside their city and people, including former GCPD detective Jim Gordon, have started to hunt these monsters down for money. Oswald Cobblepot starts rallying the people of Gotham against the 'monsters', causing a city-wide hunt against them. Most of the monsters ended up fleeing or the city or killed by angry mobs. Oswald's war against the monsters earned him recognition from the Gotham citizens, which he used to secure his place as mayor of the city.

Ironically, Oswald would end up needing the help of the monsters when he himself was betrayed and banished from Gotham by his allies. This idea was suggested by Ivy Pepper, who had rescued Oswald following him being shot and dumped in a river by his former friend Edward Nygma. Oswald recruited two supervillains, Victor Fries/ Mr. Freeze and Bridgit Pike/ Firefly, the former of which was angry on seeing Oswald and strangled him due to being banished from the city, however agreed to a team up when Oswald said he would help Fries reverse his mutation once he takes back his power. 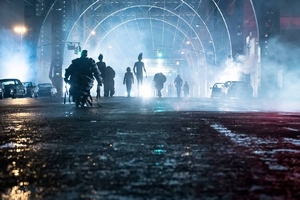 The 'monsters' escaping into Gotham 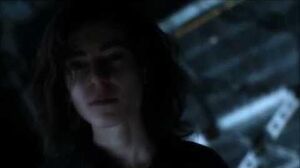 Gotham - 2x22 - Monsters of the Bus Roam the streets of Gotham