The Monstra is a massive, whale-like Creature of Grimm from the American animated webseries RWBY. Only one of these Grimm has appeared so far, in the Volume 7 finale "The Enemy of Trust" as Salem's mount as she leads an army of Grimm into Atlas.

The Monstra is the largest Grimm so far, surpassing even the Wyvern and Leviathan. It has a gargantuan, round black body with a golden glow emanating from within, red fins, and a jagged purple dorsal fin. It also appears to have dozens of massive, sharp teeth lining its mouth.

The Monstra acts as a mobile fortress for Salem's Inner Circle.

Like other Grimm, the Monstra was created by the God of Darkness in an attempt to rid the world of life, and remained even after he and the God of Light abandoned Remnant. Salem later took control of the Grimm after her corruption.

When Salem reveals that she is coming to Atlas herself with an army of Grimm, Team RWBY and their allies prepare for her arrival. However, none were prepared for the army that she brought, full of Nevermore, Manticores, Teryxes, Winged Beringels and Sphinxes. Leading the charge is Salem herself, riding atop the massive Grimm for all Atlas to witness. 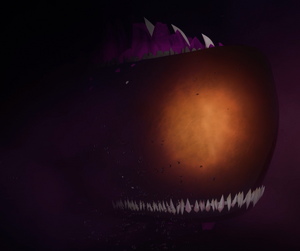 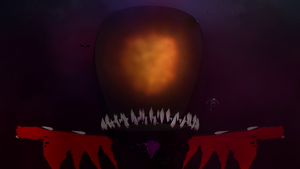 The Monstra making its entrance