Monstro (The Binding of Isaac)

The Binding of Isaac

Homicidal Monster
Monstro, also known as The Hairlip and Monstro II, is a boss encountered in The Binding of Isaac, appearing first in The Basement and the Burning Basement while alive and The Depths and the Dank Depths as Monstro II. He is one of the many monsters Isaac faces in his battle against the dark forces wishing his demise.

Monstro appears as a hideous swollen mass of flesh with a fleshy, deformed face. He also appears later as Monstro II which is its barely fleshy skull with one pale eye.

Monstro is a slow but powerful boss. Its main ways to attack are hopping to the player, sneezing bloody projectiles, and trying to slam on top of the player, creating a shockwave. As Monstro II, its sneezing attack turns to a mighty laser beam and can summon Suckers with its shockwave attack. 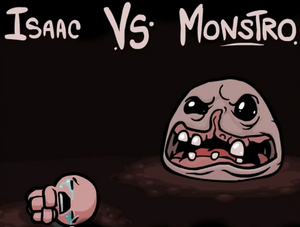