Expert in the use of blasters

Montross is a fictional character and recurring antagonist of the Star Wars franchise, appearing as the central antagonist in the video game Star Wars: Bounty Hunter.

He is was a nefarious Mandalorian bounty hunter who betrayed his brethren and later became the sworn enemy of his arch-rival Jango Fett, up to the point where he sought to kill him during which both seek to hunt down Komari Vosa for a bounty award offered by Count Dooku; these events took place ten years before Episode II: Attack of the Clones occurred.

He was voiced by Clancy Brown, who also portrayed Savage Opress in the franchise's 2008-2020 animated television series Star Wars: The Clone Wars. Adding to his well-known acting contributions include Lex Luthor in the DC Animated Universe, Byron Hadley in The Shawshank Redemption, Charles Zim in Starship Troopers, Silas in the animated television series Transformers: Prime, and Mr. Krabs in the cartoon TV show Spongebob Squarepants alongside it's movies and video games.

Originally in the past, Montross grew up to be a highly skilled Mandalorian warrior and was formerly friends with fellow member Jango Fett; they both served their leader Jaster Mereel, who later appointed Montrosss as his right-hand man. As time went on, however, Montross grew dangerously ambitious and ended up betraying Jaster to the rogue Mandalorian faction known as Death Watch and left him for dead. He sought to takeover the Mandalorians by fabricating an incident where Jango died seeking to save Jaster, but this was foiled when Jango learned the truth and ended up exposing Montross' treachery to their bretheren. Consequently, Montross was banished from the Mandalorians after their interim headman Silas supported Jango with the decesion.

Years later, Montross had become a ruthless bounty hunter, making a rule to always kill its targets, even when they paid more alive, saying that "money meant nothing to him, the thrill driving him". He was eventually contacted by Tyranus to kill Komari Vosa in exchange for five million credits. However, Jango also received the offer.

The Bando Gora was involved in making and selling death sticks. Both Montross and Fett began tracking the origin of the death sticks. Montross tracked the death sticks to Groff Haugg. He found Groff in one of Corusacant's districts and interrogated him. Groff lied to Montross and guided him to the Gazzari system. Montross later froze Groff to death in carbonite to keep his mouth shut. Jango arrived and they battled but Montross escaped and began looking for Komari in the Gazzari system. He learned from his ship's computer that some time ago the Republic stopped the death stick operations in the system and realized Groff lied to him.

Montross then learned that some smuggler, Bendix Fust who was serving time at Oovo IV, and wanted alive by the drug lord Sebolto, who Montross realized might be the last link to Vosa. Learning that the prison was having a riot and communications had been jammed, Montross realized Fett was involved and headed to Malastare, to Sebolto's hideout.

However, Fett arrived there and got to Sebolto first, causing the Dug to escape through a ramp but fell to his

death. Montross arrived on a skiff and fought Jango again but it was ended when Zam Wessel arrived with the Slave I and fired missiles at Montross. Wessel and Fett made their escape but Montross activated a listening device on the Slave I. They headed to Tatooine after examining Huttese marks on Sebolto's drug ships.

While Fett and Wessel were busy in Tatooine, Montross was overhearing Jango's conversations with Roz, his friend and informative. Montross tracked the contact and went to the Outland Station. He later tortured Roz to near death for the location of Komari Vosa and planted bombs in the Outland Station in order to kill Fett, taunting Jango through a transmission. Jango arrived after killing Gardulla and escaped in time, however the explosion killed Roz and hundreds of other people.

Montross headed to a moon of Bogden which was the hideout of the Bando Gora. Jango caught up to him and confronted Montross at the front gate of Vosa's fortress. Montross redonned his Mandalorian helmet and challenged Fett to a fight to the death. Fett accepted and both of the Mandalorians had their final showdown. Jango won the fight, and left a supplicating Montross to be killed by the Bando Gora cultists.

Although he is not Force-sensitive, Montross has shown to be shown to be on the best bounty hunters of its time, rivalling Jango in that regard, having been a mandalorian like the latter was. He is an expert tracker, interrogator and marksman and is also knowledgeable in the art of warfare. 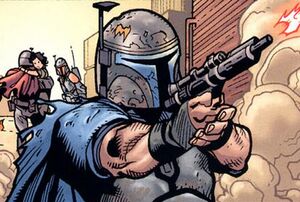 Montoss during his Mandalorian days. 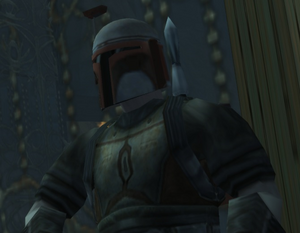 Montross redons his Mandalorian armor to face Fett for their final showdown.