Torturing others
Killing others

Moon is the secondary antagonist of the 1991 film Double Impact. He is Raymond Zhang's right-hand-man and Chad Wagner's nemesis.

He was portrayed by Bolo Yeung.

Moon is the leader of a triad squad led by Raymond Zhang and his overall right hand man and most brutal enforcer. He is also very skilled in martial arts. When Raymond Zhang and his partner Nigel Griffith decided to eliminate Nigel's partner Paul Wagner, Moon was tasked with leading the attack on him and his family outside their house. Moon was the one who personally shot Paul's wife Katherine to death. Just when he was about to kill their twin children too he was shot by Paul's friend and bodyguard Frank Avery. Moon recovered and tried to shot Frank but was shot by him in the face instead giving him a permanent scar. Despite his injury he managed to shot Frank in the shoulder but that didn't stop him from taking the children to safety. Frank raised Chad Wagner in France and then in USA while Alex Wagner grew up alone in Hong Kong.

Twenty-five years later Frank was informed that Chad's brother was still in Hong Kong and decided to fight Zhang and Griffith once again. The two brothers were eventually reunited and started to plan how take Zhang and Griffith down. At one point Zhang and his men captured Chad believing than he was Alex and asked him to do business together. When Chad refused and insulted Zhang, Moon preceded to brutally beat Chad (even killing one of his own men in the process). Later, Zhang managed to locate their hideout and captured both Frank and Alex's girlfriend Danielle Wilde. Moon once again personally led the assault and even beat Frank in the process avenging the scar he gave him twenty-five years earlier. They were soon brought to one of Zhang's boats for further interrogation and the two brothers came to rescue them. During the interrogation Moon continued to torture Frank along with Kara and other henchmen and even attempted to shoot him even though it was only a trick to find out where the brothers were hiding. Moon soon encountered Chad again and the two started to fight. Moon attempted to attack Chad by throwing barrels at him. Chad proved to be more prepared this time and gave Moon trouble forcing him to fight seriously. Chad gained the upper hand and kicked Moon into a big switchboard electrocuting him and killing him. The two brothers then rescued Frank and Danielle and killed both Zhang and Griffith.

Moon is a cold-blooded killer with no remorse even for helpless women and children and doesn't tolerate failure and weakness even killing his own men if they fail as was displayed during his first fight with Chad. He is also sadistic and brutal, enjoying to torture people as well as a dirty fighter, hitting their enemies in weak spots and even using weapons and other objects when he is at a disadvantage. He seems to be loyal only to his boss Raymond Zhang. 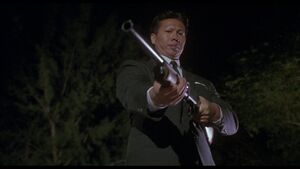 Moon about to kill Katherine Wagner. 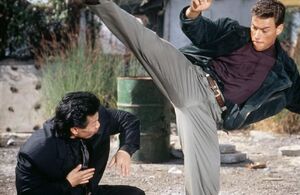