The Moon Lord is the final boss and main antagonist on the Desktop, Console and Mobile versions of the sandbox videogame Terraria, introduced in the 1.3 update.

Prior to the events of Terraria, the world was attacked by Cthulhu and nearly destroyed, but it was stopped by an ancient race of Dryads connected to the planet. Though they were unable to kill Cthulhu and mostly died out, they crippled the deity and banished it to the far side of the Moon, where it became the Moon Lord seen in the game and plotted its revenge. They also ripped out one of its eyes, part of its skeleton, and chunks of its brain implied to become the Eye of Cthulhu, Skeletron, and the Brain of Cthulhu, respectively. After many years, a doomsday Lunatic Cult led by a fanatical zealot, implied to be the Lunatic Cultis, began seeking to methodically revive Cthulhu and bring about the end of the world. In order to accomplish this, they kidnap a Mechanic, place her in a Dungeon, and force her to build replacement parts for the deity, se mostly completes her work, implied to have created Skeletron Prime, The Destroyer, and The Twins, only needing to complete the mechanical brain. An Old Man is also possessed by Skeletron during this time and becomes a steward to the Dungeon.

In the actual game, the player will encounter the cult in the Dungeon that used to house the old man possessed by Skeletron, in a small group appearing to be worshiping the Moon Lord. If you attack the cultists and kill the Lunatic Cultist who appears after, you unlock the Celestial Events, where four pillars (Nebula, Solar, Stardust, and Vortex) are summoned into your world, summoning celestial monsters near their location. You are then tasked to destroy each of these pillars, but as you do, something appears to not be right, as flavor text afterward says your minds goes numb, your body gripped with pain, and hearing "otherworldly voices" lingering. (Each of these flavor text comes in after the first, second, and third destroyed pillar respectfully.)

After destroying the last pillar, the screen will vibrate and the music will fade out. After this event, the player has one minute to get ready for a fight, because after this period, the Moon Lord will appear, and the fight with it will begin. The Moon Lord has various deadly attacks, such as:

The player must destroy each of the hands and the head to open the core, the Moon Lord's weakspot. When one of the body parts are destroyed, said body part grows harming thorns and spawns a True Eye of Cthulhu, which does each of the first four attacks. If the player dies to the Moon Lord, the Moon Lord despawns, and the player must refight both the Lunatic Cultist and the Pillars. However, if they beat the Moon Lord, it shakes violently and explodes, leaving only a skeleton behind, vanquishing the threat to Terraria forever. After this, the player can both reap the rewards of the powerful items it gives when defeated and complete the game.

The Moon Lord has a quite similar appearance to its counterpart in Lovecraftian lore, barring some differences. The Moon Lord has brown skin with various blue parts complementing it. Its head has an exposed brain, five blue eyes, a set of razor-sharp teeth, and blue tentacles. Its body has a muscular chest, a core on the chest (which is its weakpoint), and two arms that have small spikes on the arm and a eye on each palm. However, the Moon Lord lacks a lower half, ending in an exposed part of its spine. 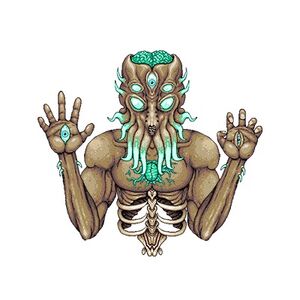 "Champion of Terraria", the Achievement you get for beating the Moon Lord for the first time.

The Moon Lord's Treasure Bag in the game's Expert Mode.
Add a photo to this gallery

Retrieved from "https://villains.fandom.com/wiki/Moon_Lord?oldid=3890874"
Community content is available under CC-BY-SA unless otherwise noted.