Leader of the animals

Authority over his minions

Moose Nazir is a minor antagonist in Brickleberry, only appearing in the episode "The Animals Strike Back". He is an evil moose who leads an army of animals in an uprising against the humans of Brickleberry National Park.

In "The Animals Strike Back", on Earth Day, Malloy drove an electric car around the park and killed a bunch of animals. Moose Nazir saw this and was very unhappy with him. Later, Moose Nazir broke into his house and knocked him out cold with his hoof and then dragged him back to his cave with all of the other animals. When Malloy awoke, Moose Nazir made fun of him for being an animal that acts like a human. Moose Nazir showed Malloy all of the animals he killed but he said that it wasn't his fault. It was the humans that made him this way. Moose Nazir tried to help Malloy start acting like a real animal again by giving him a plate of maggots. Malloy was instantly ready to return to the human world, but Moose Nazir told him that he knew what really happened to his parents. He said that he was there for the incident and saw that one of his fellow rangers at Brickleberry National Park killed his parents in a hit and run accident, but he didn't know which one because they all look the same to him. Moose Nazir convinced Malloy to start hating humans and turn on the Brickleberry Park rangers. Malloy went to Brickleberry National Park with a list of demands the animals had for them such as less pollution, a ban on hunting, and overall, better treatment. Woody laughed this off as some cute little game he was playing and didn't take it seriously at all. Because his demands were not met, Moose Nazir led the animals in protest against Brickleberry and drove all the tourists away, since they didn't get to see any animals. Malloy later became friends with Moose Nazir and took a few whiffs of his rear end. Malloy congratulated Moose Nazir for his plan working out so well but Moose Nazir said his plan was only beginning. Because Brickleberry refused to give in to the demands, his next step was to kill them all. Later, Moose Nazir noticed that Neil Deer had been unfaithful and eaten human food from a garbage can, so he ordered the other animals to maul him to death. This established that Moose Nazir was very strict about his animals not partaking in human luxuries and swore that if they were to tray from their true animal culture, he would have them executed, no matter how close they were to him. Despite this, Malloy snuck into his cabin at night and tried to sneak in a night of playing video games, eating artificial candy, and hiring a Filipino hooker. Joe Wolf saw this and went to snitch on Malloy to Moose Nazir. When Malloy came back, Moose Nazir was furious at Malloy for betraying him. Before any justice could be dished out, just then, Connie came in to admit to killing Malloy's parents, only for Steve to shut her up and admit that it was really him who did it. Malloy got really mad at Steve and Moose Nazir urged Malloy to redeem himself by killing Steve right then an there. The animals had Steve pinned the the ground and Moose Nazir demanded Malloy to eat his face off. For some reason, Malloy to too chicken shit to do it and told them that he was a human lover and he wasn't going to change and if he really had a problem with that, he'd just have to kill all of the humans, including himself. Moose Nazir just said, "Alright, we'll kill everyone.", and they stampeded after them. Malloy, Steve, and Connie ran for their lives before the animals finally stopped them. Moose Nazir was about ready to eat Malloy's skull and kill him before Steve summoned a swarm of bees to attack him only for the bees to attack himself. While Steve flailed around like an idiot, his gun dropped out of his pocket and fired them it landed on the ground. When that happened, the bullet ricocheted around the park and shot all of the animals in the army, including some innocents dead, with the final animal to die being Moose Nazir. Malloy was grateful that he was saved but instead of even thanking Steve, he just bluntly said "You had a gun the whole time.", angered he didn't just use it earlier. 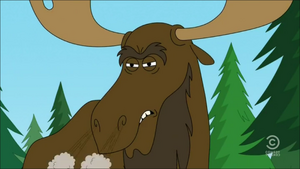 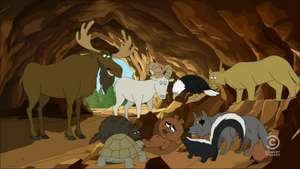 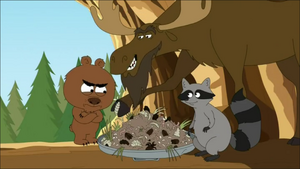 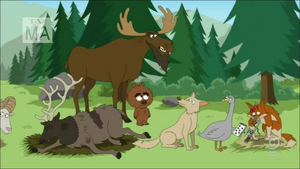 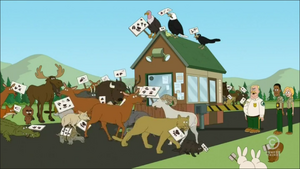 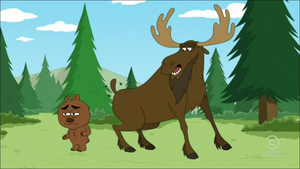 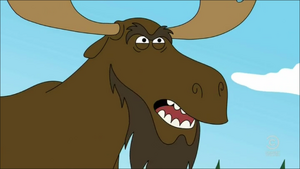 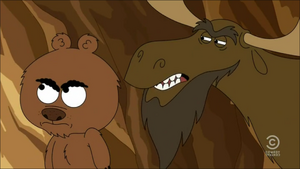 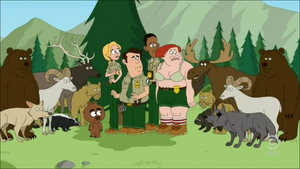 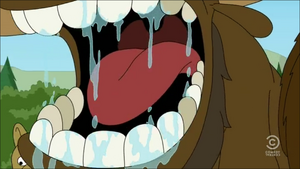 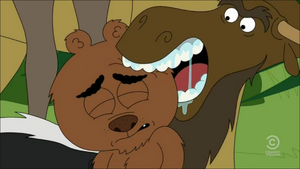 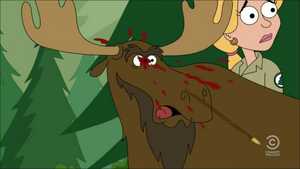