Mopey Popo is a one-time villain from the Cartoon Network original series The Powerpuff Girls, only appearing in the episode "Prime Mates". He is a rejected member of Mojo Jojo's monkey army from "The Powerpuff Girls Movie", that never made it into the final team.

In "The Powerpuff Girls Movie", Mojo Jojo created an army of monkeys, that would use to take over the world. Monkeys would be chemically enhanced and mutated into supergenius, superprimate beings, that would destroy everything. One of these monkeys ended up being a dud, because Rocko Socko, destroyed the dome, that he was developing in, and his brain got sucked out and he couldn't finish developing. Mojo recognized him as a reject and flushed him into the sewers.

In "Prime Mates", Mopey Popo returned to Mojo's Lair to get revenge on him. He threatened to kill him with an exceptionally sharp slice of banana jerky, his own original recipe, but Mojo begged for mercy, and said that the only reason he flushed him into the sewers was because he was special, a cut above the rest, and he didn't want him to get hurt in the fight. Obviously a lie, but Mopey Popo stupidly believed it. Mojo allowed Mopey to work alongside him, but all Mopey did was screw things up and act annoying. Mojo tried to load a laser cannon with isotopes, but Mopey Popo kept making him drop them and hurt himself. He was also very bad at obeying orders and could not pay attention or do even the simplest of tasks to save his life. After a series of hilarious events, Mojo got sick of putting up with Mopey's crap and kicked him out of the house.

Almost instantly after getting kicked out, Mopey Popo knocked on the door, making a much unappreciated return. That is, until Mojo saw that he had kidnapped The Powerpuff Girls. The girls were unconscious and tied up in some ropes. Mojo Jojo accepted him back into his life and he used his freeze ray to freeze The Powerpuff Girls to death. In the middle of the process, Mojo Jojo took all the credit for doing it, himself. Also, Mopey Popo got bored of being a villain and quit the villainous lifestyle all together. Mopey Popo shut off the freeze ray, allowing The Powerpuff Girls to be free again, and he ditched Mojo Jojo, without even looking back.

After Mopey Popo left, The Powerpuff Girls beat Mojo Jojo senseless and The Narrator credited Mopey Popo as being the one who saved the day. Since then, The Powerpuff Girls were apparently none the wiser, when it came to Mopey Popo, so they never did anything about him. Meanwhile, Mopey Popo spent his new life, pursuing a career in selling his original recipe known as banana jerky. 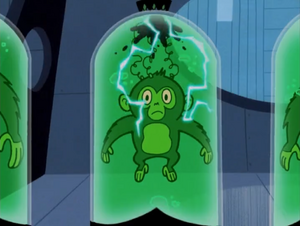 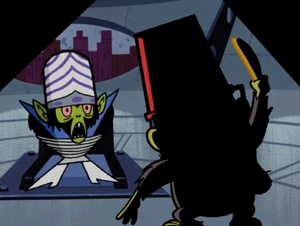 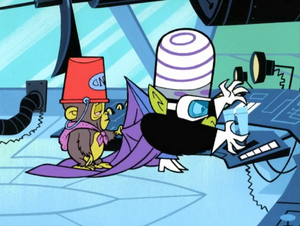 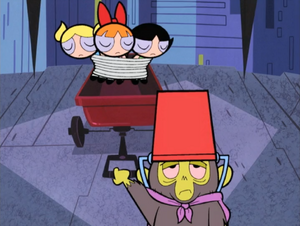 Retrieved from "https://villains.fandom.com/wiki/Mopey_Popo?oldid=3809949"
Community content is available under CC-BY-SA unless otherwise noted.