Assemble a group of bounty hunters for Count Dooku (both succeeded).
Track down and kidnap Chancellor Palpatine for the Separatists (failed).

Moralo Eval is a minor antagonist in Star Wars: The Clone Wars, where he serves as one of the main antagonists of Season 4. He's a male Phindian bounty hunter and crime lord who took part in a conspiracy to kidnap the Supreme Chancellor, Sheev Palpatine, on behalf of Count Dooku and the Separatist Alliance.

Moralo Eval was born on the planet of Phindar during the final years of the Galactic Republic where he had a rough life growing up. As a child, Moralo had developed psychotic tendancies and murdered his own mother at a young age.

He was later arrested by the authorities and said that he killed his mother because he was "bored" and remained imprisoned for some time. Moralo later escaped and turned to a life of crime and became a fugitive where he developed proficient survival, technical and engineering skills while on the run. He also became more and more deranged and began refering to himself in third person.

During the Clone Wars, Moralo Eval had originally served as a bounty hunter and collaborator with the Confederacy of Independent Systems against the Galactic Republic. He was contacted by Count Dooku at some point to take part in a plot to kidnap Chancellor Palpatine of the Republic as a means of having the Separatists gain ground in the war, but was later imprisoned.

He, along with Cad Bane, would be set free after taking part in a prison riot instigated by Rako Hardeen (who was Obi-Wan Kenobi in disguise) and the three of them escaped. He later tagged along with Hardeen and Cad Bane as they traveled across the galaxy to regroup on Serenno to take part in the plot.

The trio of bounty hunters managed to make it to Nal Hutta and escaped with their lives after Hardeen (Obi-Wan) forced them to tag along with him and made it to Serenno where Dooku was awaiting them along with other bounty hunters selected for the special mission.

On the planet, Moralo and Dooku head to a facility simply known as "The Box" and has the hunters forced into it to take part in many lethal tests to see who's strongest and most worthy for the mission. During the tests, Hardeen proved himself to be worthy and Dooku was even wondering if he should take over Moralo's position as the head of the mission, which angered him greatly.

In the final test, Moralo appeared and challenged Hardeen's target practicing with a blaster sniper. However, Hardeen soon ran out of charges, inciting Moralo to drop Hardeen into the floor panels below that were spewing fire. Unfortunately, Can Bane interfered as he saved Moralo from falling by catching him with a rope and then told Moralo to kill Hardeen like a man. Dooku agreed as he appeared on a giant screen and forced Moralo and Hardeen to fight. Hardeen beaten Moralo senselessly, but when Dooku told Hardeen to finish him, Harden let him live because he "just wanted to do his job and get paid". 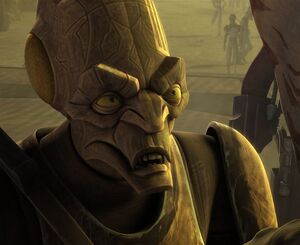