Assist Firat in his plan to kill Madame Kura (failed).

Homicidal Terrorist
Moras is one of the secondary antagonists of Joe Camp's 1979 mystery film by Paramount The Double McGuffin. He is one of Mr. Firat's henchmen.

He was portrayed by Rod Browning.

In the first scene of the film, the bigger assassin orders a driver to deliver a briefcase to St. Moritz Hotel. The following night, Moras waits at the hotel and tries to assassinate Madame Kura, but misses. The next morning, the briefcase falls out of the car and into the woods. The briefcase is eventually found by Homer Rutledge and he tries to show it to his friends, only to find the corpse of the driver and they flee. They try to inform Chief Talasek and he reluctantly goes out with them, only to discover the corpse gone. The kids later notice Firat holding the same briefcase and try to show it to Tally, but Firat arrives and Tally refuses to open it. However, he reluctantly decides to and opens it, only to find underwear instead of money. The following night, after a football game, Specks and Homer walk into the woods and find a dismembered hand in the briefcase, so they flee.

The next morning, Billy Ray follows Firat to Hotel Bonnieux and the others follow him as well. Firat receives a letter from Moras to meet him at the Iron Horse bar and Billy Ray spots them having a conversation at the bar with the other assassins. Specks and Foster keep watch of them, while Homer and Billy Ray head to their hotel room to hide a walkie-talkie to listen to their conversation. They discover a stack of firearms in the trunk and they notice that the telephone is taken off the hook, so they flee the room. They are almost caught by the assassins, but they manage to escape. The kids listen to their discussion about the homecoming banquet through the transceiver and overhear their assassination plot. Before they could listen to anymore of their plan, the bearded assassin pours alcohol on the walkie-talkie, destroying it. The kids later notice Moras and the other assassins setting up the homecoming party and they come up with a plan to stop them.

The kids hire Arthur Honeycutt to help them and Foster distracts the assassins by setting off a fire alarm, while Jody manages to take pictures of them. The next night, Specks, Homer and Arthur sneak into the computer programming room and manage to print out some papers, while Billy and Foster sneak into Talasek's room and print out information of the assassins. They learn that Firat is only known for being an illegal immigrant from a Middle Eastern country called Kaboor and notice that Moras is a known sympathizer with the O.R.I.. They also learn that Firat and the assassins are after the prime minister and that Kura is the targeted victim. 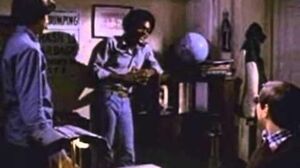