To takeover Earth by possessing every human (failed)

Aliens
The Morax are the antagonistic faction of the Doctor Who episode "The Witchfinders".

They are an alien race that can take the form of mud and can possess people to use them as a vessel.

They along with their King and Queen, were imprisoned in a tree that acted like Semtex to them. They were placed on Earth on Pendle Hill in the village of Bilehurst Cragg in Lancashire.

Billions of years later in the 17th century, the landowner of Bilehurst Cragg Becka Savage chopped the tree down as it was blocking her view. However as she chopped down the tree, Savage became infected by the Morax Queen, who used Savage to kill people, claiming them to be witches. In reality, it was so the other Morax could use the corpses as vessels. Savage had killed 36 people, including her own grandmother. Eventually, the Morax Queen took full possession of Savage.

The Morax later kidnapped King James I in an attempt to use him as a vessel for the Morax King. However, The Thirteenth Doctor along with her companions Graham O'Brien, Yaz Khan and Ryan Sinclair and Savage's cousin Wilma used lit branches from the tree to make the Morax leave their vessels with only the Morax Queen refusing to surrender. In retaliation, King James I took one of the burning branches and struck the Queen with it, causing her and Savage to be incinerated. 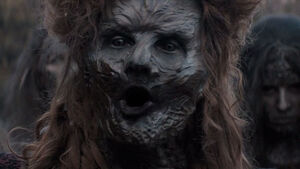 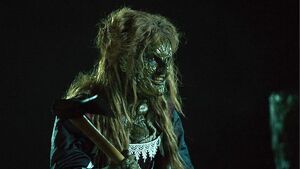 Retrieved from "https://villains.fandom.com/wiki/Morax?oldid=2985563"
Community content is available under CC-BY-SA unless otherwise noted.