Ruler of the Afterworld

Conquer the realm of the living

Mordekaiser, also known as The Iron Revenant and formerly known as Sahn-Uzal, is a villainous playable character in the multiplayer online battle arena game League of Legends.

A nightmarish, undead warlord, Mordekaiser has great prowess in his invasive abilities and enslaving souls with his necromancy. Slowly plotting his return to the world of the living, Mordekaiser knows they will stand little chance against him when his plans come to fruition.

He was originally voiced by Adam Harrington, who voices pre-rework Karthus and Shaco in the same game, as well as LeChuck from Tales of Monkey Island and Andrew St. John from The Walking Dead. Since his rework, he was voiced by Fred Tatasciore, who also voiced Saren Arterius in Mass Effect, Neftin Prog in Ratchet & Clank: Into the Nexus, Nikolai Belinski in Nazi Zombies, Cuckoo Clocker in Skylanders: Trap Team, and Megatron in Transformers: War for Cybertron.

When he was alive, Sahn-Uzal conquered with no mercy and ruled with a iron fist. Snapping any tribe who dare be in the northern wildlands underfoot, he became a truly haunting foe to fight against. As he laid old and dying, he took comfort in his faith saying he would be seated among the gods, but when he reached the afterlife, he only found barren fields of the dead.

Furious at this assumed deception, Sahn-Uzal learned Ochnun, the language of the dead, and whispered promises of glory to anyone who revive him. Once finally returned to the realm of the living by mages as a spirit bound to his armor, he slaughtered the unfortunate magicites, took his new name, and set out to conquer the mortal realm once more. He hungered for both knowledge and power, taking the Immortal Bastion at the center of his kingdom while also researching the truths behind the realms.

However, Mordekaiser was killed once more by the traitorous LeBlanc and a alliance of the local tribes, sealing away his armor with his soul ripped from it. Despite this setback, Mordekaiser had plans for this still, corrupting the souls of the dead to serve in his army. Although with his old keep under new management, his name is still a boogeyman for historians, a figure both terrifying and incredible. And for the souls of the dead that remember this foe, their greatest fear of Mordekaiser rising from the grave for vengeance and conquest are always on the backs of their minds, knowing that if he rose, that there's no hope for the living to end his tyranny a third time.

Taking the role of a juggernaut type character, Mordekaiser uses his massive mace and dark magic to attack his foes. His passive, Darkness Rise, allows him to do bonus magic damage after dealing enough hits. He can also smash his weapon into the ground with Obliterate, protect himself from damage with Indestructible, boost his attacks with magic penetration with Death's Grasp, and pull targets into to the realm of the dead (where they are invisible to their allies and receive debuffs) with Realm of Death.

A brutal warlord from medieval times, Mordekaiser is shown to be cruel and merciless, taking pleasure in the suffering of his enemies and relishing his role as a dark lord over humanity. Like most dark lords, Mordekaiser is incredibly self-centered, aspiring not only to rule over the dead but the living as well. Mordekaiser does not fear death but embraces it, often touting the strength of iron over the weaknesses of flesh, showcasing an arrogant side of the revenant's strong belief in his ideology of death. 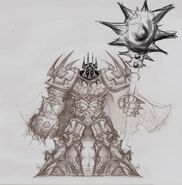 Mordekaiser in "The Final Reign". 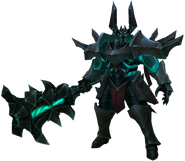