Possess much victims as he can.

Mordeos are a group of supernatural creatures, and the titular main antagonists of the short film of the same name, they appear to be a tall deer vampire-wolf creatures; The assumed leader appears to be wearing a black robe.

Their faces are blank and featureless; they have a faceless deer skull for a face.

It's heavily implied that Mordeos are actually Wendigos, with just a different name for them.

Two hikers appear in the woods, one of which had killed and cannibalized the other one. As he continues eating his flesh, a Mordeo appears before them, looking at them. Suddenly it possesses the dead hiker, who tells his killer, "Your hungry, no shame in that, but there's a price for eating flesh in these woods. Your part of the Mordeo now.". Suddenly, the unnamed killer begins a painful transformation, growing horns before totally losing his human appearance. He has become a Mordeo, complete with a howl, one that can be heard thoughout most of the video. The possesed corpse laughs and says "Time for the blood hunt", as the newly made Mordeo precceeds to eat him far faster and way more brutally.

Shortly after, another unnamed man, wearing a deer mask, attacks a couple, chopping off the boyfriends fingers as the girlfriend hides. Before he finds her, the Mordeo howl is heard, and he leaves to find it, giving the couple a chance to flee. The masked man sees the lead Mordeo and asks to be transformed, using the chopped off fingers to try eating infront of the Mordeo as some kinda ritual, and saying he did everything in the book. But unfortantely for him, the Mordeo appearently found him unworthy, instead just breaking the man's neck, killing him. And than is seen eating the corpse.

It than cuts towards three girl scouts. After a Mordeo murders one of them, the girl that witnessed it panics and tries to get the lead girl to flee, but the lead girl, having not seen the Mordeo, believes the other girl murdered her and a fight breaks out, the lead girl trying to strangle her. In desperation the other girl bites her, and accidantally kills her attacker by pushing her into some rocks. The unnamed girl scout noticed she was being watched by the lead Mordeo, who appearently finds her worthy, and makes her one of them.

But before she transforms, the girl scout than is taken in by a couple, same one that was attacked by the guy in the deer mask . Unfortantely, it's once she taken into their cabin that it happes, and the newly made Mordeo ends up violently killing the boyfriend, but the girlfriend flees. The girlfriend tries in vain to escape the forest, and almost does. But after trying to get help from a truck driver, she instead discovers he's in on it. And unfortunately she two is murdered by the (presumed) Mordeo leader.

It's strongly implied the forest belongs to the Mordeos. 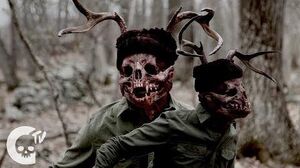