Have his own kingdom (failed).

Mordred is a villain in DC comics and the son of Morgaine Le Fey. He desires to be the king of Camelot but is granted eternal life and youth to have the throne and rule his own kingdom forever. He is based on the villainous traitor Mordred of the Arthurian legend.

Born in May 1, Morded was conceived as the symbol of Morgaine Le Fey’s revenge against King Arthur, Mordred grew up hating his father, dreaming the day when he will kill Arthur and destroy his beloved kingdom. When he still is being a child, Morgaine (also called Morgana by the Elder Folk) sent him to destroy Camelot leading her army and enchanting his armor so he could not be harmed by any man made weapon.

The final battle of Camelot started with an attack to the suburbs and then an attack to the castle with soldiers, demons, monsters and dragons (Morgaine Le Fey also participated in the battle). The first battle was won by Morgaine’s army; even Merlin’s demon Etrigan was unavailable to defeat them. The whole castle was destroyed and hundreds of men, women and children died.

The next morning Mordred was waiting his mother’s return in the now destroyed castle, and when she returned, also appeared his aunt and Merlin’s lover, the nymph Nimue Inwudu (now called Madame Xanadu). After a little talk between Morgaine and Nimue, Mordred went to find his father’s last men, but this last battle was never what he long wanted. Arthur’s sword Excalibur was not a man made weapon, it was something else and when Mordred attacked him Arthur cleaved him in two. From the sky, Morgaine saw everything and when she saw her son being killed she became powerless and fell to the ground, after that she was captured by the last of Camelot’s survivors escaping a time later.

Centuries later, Morgaine became the leader of the Church of the Midnight Dawn, a satanic cult to make them find 3 relics: Mordred’s war-helm, the spear head that killed King Arthur and the Philosopher Stone. With this artifacts she would be able to resurrect Mordred so him could lead a new war in the new man’s world but Mordred’s helmet was stolen by her sister Madame Xanadu and the detective John Jones (the Martian Manhunter) and she was defeated by her.

Mordred also appeared in Camelot 3000 and Batman: Dark Knight of the Round Table, but these versions were not really connected with the original. In Camelot 3000, he had reicarnated as Jordan Matthew, where he and his mother led an alien invasion.

Mordred is a mystical being by his mother’s side. As a warlock he may not be as powerful as Morgaine Le Fey, but he has magical abilities like powerful green energy blasts, animate inanimate objects like gargoyles, toys and chairs, flying and cast a big number of powerful spells.

As a weapon he has his sword with what he is almost as good as his father King Arthur, his enchanted armor that protects him from any man made weapon and his shield.

In the Justice League Unlimited episode ‘’Kids Stuff’’, Mordred used the Amulet of First Magic to send all the adults on the planet including his mother to an other dimension and turned an amusement park called Funseyland into his own city to began the rule of his empire. Morgaine transformed the Justice League into children so they were able to return to Earth and defeat Mordred. Tricking him they made him transform himself in an older version of himself, doing this he was sent to the other dimension annulling the spell.

After that it was revealed that Morgaine put a spell to keep him young forever, since Mordred broke it he became older into that of a man centuries old but still being immortal. He was no longer a threat due to his age and his shattered mind, Mordred was tended to by his mother who wiped away his consistent drooling in a motherly and possibly taunting manner.

A continuation to this story was presented in the Justice League Unlimited comics # 33. Here Morgaine used the London Stone to make Mordred young once again. Doing this, Stargirl and the Crimson Avenger changing bodies and returned to normal by destroying the stone itself. After that, Morgaine Le Fey and Mordred accidentally changed their bodies and when Mordred tried to use magic in Le Fey’s body, he made them disappear. 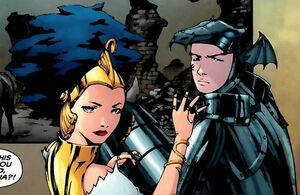 Mordred with his sister, Morgana, another child of Morgaine Le Fey. 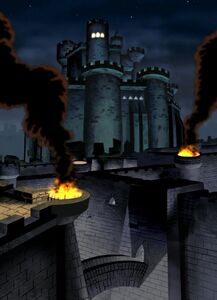 Morgaine Le Fey temporarily transform the city of London into a massive castle for her son. 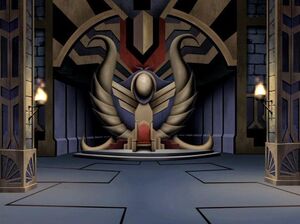 The throne inside Mordred's own castle.

The throne room of a massive palace Morgaine presented to her son as a gift. 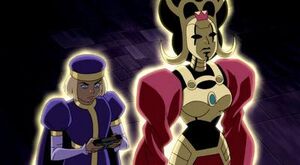 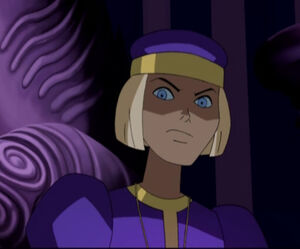 Mordred refuses to give up the Amulet of First Magic to his mother. 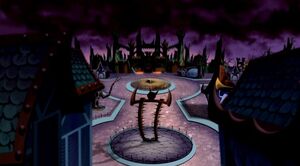 Funseyland amusement park has been transformed by Mordred into his kingdom. 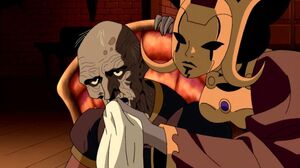 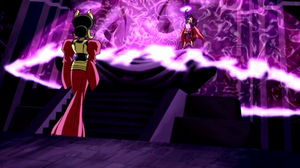 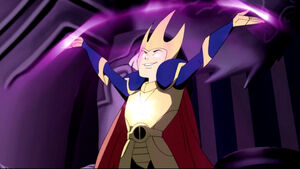 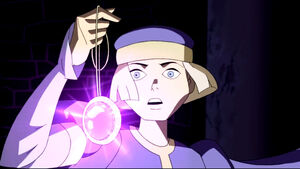 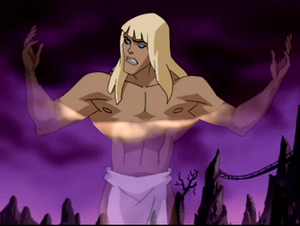 Mordred ages into an adult.
Add a photo to this gallery

Retrieved from "https://villains.fandom.com/wiki/Mordred_(DC)?oldid=3550831"
Community content is available under CC-BY-SA unless otherwise noted.