Destroy Dirk the Daring and his brother.

The game takes place years after the events of the original Dragon's Lair. Dirk the Daring has married Daphne, and the marriage has produced several children. When Daphne is kidnapped by the evil wizard Mordroc in order to be forced into marriage, Dirk's children are clearly upset by the abduction of their mother, and Dirk must once again save her.

Along the way in Mordroc's castle, Dirk meets a well spoken time machine who seems to be possessed by his brother. Dirk travels in several eras like the prehistoric age, Lewis Carroll's Alice in Wonderland, the Garden of Eden, Ludwig van Beethoven's house, and Ancient Egypt. Finally Dirk makes it to Mordroc's castle only to witness him put the Death Ring on Daphne's finger, thus turning her into a large monster. The monstrous Daphne mindlessly tries to devour Dirk, but he jumps onto her hand and gets the Death Ring off her finger with his sword. The ring flies to his finger and turns into a bloated monster who gets killed afterward by Dirk's sword. Dirk wakes up Daphne, who has been changed back to normal, with a kiss. The two escape from Mordroc's crumbling castle with the time machine and return back to their family.

Mordroc acted as the main antagonist and final boss of the game. In it, he was imprisoned long ago, and his minions, all of which appeared in the original Dragon's Lair game, took the Dragon Essences for themselves. Eventually, Mordroc had his dragon, Singe, kidnap Princess Daphne at the beginning of the game. This led to Dirk the Daring being misled by Mordroc's impersonation of the princess as he helped Dirk get the Dragon Essences back. At the end of the game, he reveals himself as the driving force behind what was happening throughout the game. After he was shot by magic arrows, the thing that defeated him all of those years ago, he turned into a powerful wyvern-like dragon and tried one more time to destroy his former pawn. However, Dirk defeated him and rescued the princess. 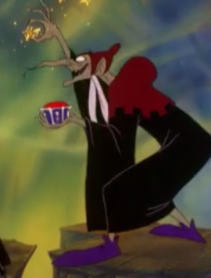 Mordroc putting the ring on Daphne. 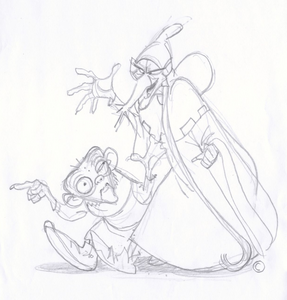 A concept art with him and his oracle Grum for the upcoming Dragon’s Lair: The Movie.
Add a photo to this gallery

Retrieved from "https://villains.fandom.com/wiki/Mordroc?oldid=4134198"
Community content is available under CC-BY-SA unless otherwise noted.