Selling weapons on the black market.

Morehart is a supporting antagonist of the 1996 film Eraser. He is the corrupt CEO of Cyrez Corporation who serves as one of the co-conspirators (the other two are his boss Daniel Harper and U.S. Marshal Robert Deguerin) behind a plot to sell rail-guns in the black market.

He was portrayed by the late Gerry Becker.

During the beginning of the film, U.S. Marshal John Kruger (the hero of the film) and the FBI came across a plan formulated by Cyrez Corporation to sell rail-guns (created by Cyrez Vice President William Donahue) to the black market, notably to an infamous Russian mafia boss named Sergei Ivanovich Petrofsky for $52 million. The FBI then turned over to Cyrez executive Lee Cullen for help, and she procured two discs containing the evidence behind the arms sale.

Following Donahue's suicide, Harper manages to steal one of the discs (thanks to a clerk named Sully), though he is angry to learn from Morehart that Cullen has got the other disc and tried to access it at her home and that she called a Washington Herald reporter named Claire Issacs about the scandal. Harper orders Morehart to have Agents Schiff and Calderon kill Issacs while assigning Deguerin to oversee an incoming shipment of 10 tons of the weaponry into Petrofsky's ship at the Baltimore docks.

While having a ride at a limousine with Harper and Deguerin, the latter suggests cancelling off the shipment to avoid any heat from the authorities, but Morehart objects to this, saying that it's not an option. After being threatened to be killed by Harper if he does not get the job done tonight, Deguerin suggests that they lay down a trap at Cyrez, deducing that Kruger and Cullen will head over there to access the disc that will expose the scandal.

To that end, Morehart had his security chief James Haggerty put up extra security at Cyrez to ensure that Kruger and Cullen cannot get into the building. However, this was not the case when the Systems Administrator detected that Kruger and Cullen have already started accessing the disc at a different terminal inside the building, something which Morehart and Haggerty did not expect. Deguerin then threatens to kill both Morehart and Haggerty unless they can figure out where they are, but fortunately for them, the Systems Administrator replies that he can scan the entire building and nail them if the computer they're using stays online.

As Deguerin and the Administrator start clearing up several rooms to pinpoint the duo's location, Morehart explains that two federal investigators have arrived and warned Deguerin that he cannot be seen. Deguerin then orders Morehart to stall the investigators while ordering Schiff and Calderon to call in a helicopter to escape. After the Administrator destroys the disc, Deguerin escapes from the building, taking a captive Lee with him while Kruger is forced to escape after killing Haggerty. Fortunately, with the help from a mob witness Johnny Castleone (whom Kruger saved earlier) and his cousin Tony Two-Toes (who owns the Baltimore docks), Kruger is able to rescue Lee and stop the shipment. After Johnny, Tony, and their men manage to finish off Petrofsky and his men, Kruger exposes the presence of the rail-guns to the arriving authorities. As a result of this event, Morehart, along with his conspirators, are presumably placed under arrest for the crimes and taken into custody.

The next day, a hearing takes place, but Morehart, Harper, and Deguerin manage to escape charges of treason, since a conviction and sentence for them will be impossible under civil law jurisdiction. As they leave in their limousine, Kruger and Lee were seemingly killed in a vehicle explosion in front of a large crowd of witnesses, including Morehart himself. Deguerin believes the explosion had been set up by Harper, but Harper assumed vice versa. The conspirators soon realize that no one within their inner circle had actually arranged it. The limousine then suddenly comes to an abrupt halt on a train crossing, and the doors lock themselves shut. The driver turns out to be Johnny himself in disguise, so he exits from the limo and runs off from the area. Morehart anxiously looks around before Deguerin receives a phone call from Kruger, who revealed that he and Lee actually faked their deaths to lure the conspirators into a trap. Looking out of the window, Harper, Deguerin and Morehart see a freight train steadily approaching them, and Kruger and Johnny stand by to watch it smash into the limousine, finally killing Morehart and his conspirators for good.

Morehart watching as Harper enters into a heated argument with Deguerin in their limousine.

Morehart and his conspirators locked up in their limousine as they are about to be run over by a freight train. 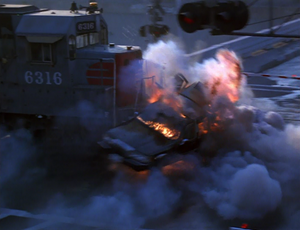 Morehart and his conspirators killed as their limousine is obliterated by the freight train.