Acting Leader of the Illuminati

Control over the world's resources

Morgan Everett is a character and is one of the major antagonists of Deus Ex. He's the CEO of the Montreal Division of Picus TV and is the leader and ruler of the Illuminati. He was once the Second-in-Command of Majestic 12 but defected upon discovering Page's betrayal.

Little is known about Everett's life but what is known is that he was born into a world of wealth and power and inhearted all of the money his parents made. He grew up under the influence of the Knights Templar took a Catholic Communion in the Cathedrale de Payens alongside the "two Rockefellers and a Rothschild" according to a childhood memory. He then became a member of the Illuminati. Sometime in 2027, he lived in France in the nation's capitol of Paris and was chosen as the protege of the Illuminati Leader Lucius DeBeers. He became the CEO of the Montreal Division of Picus TV and this allowed him to gain access to media information and control the flow of information throughout society and take care of "destabilizing elements" of society.

Sometime when he was in the Illuminati, he ran into Bob Page and managed to make him a member of the Illuminati. He introduced him into the secret society and after Page became a member, he was trained to become Everett's successor just like DeBeers did for him. During the Illuminati's plans for the Human Restoration act, Page even accompanied Everett to the meetings of the organization's leading council.

However, DeBeers did not trust Page and feared that he would steal information and betray the Illuminati. Everett didn't listen to his master and was obsessed with keeping Page his successor. Sometime when DeBeers began to feel ill, Everett put him in a cryogenic freezing chamber and would keep him alive past his lifespan even though Lucius wanted to die with honor he was kept alive. This allowed Everett to maintain his power and become the Illuminati's leader but as he took advice from Lucius as he was still the de facto leader and shared his position of power. This allowed Everett to maintain global stability from the shadows.

In 2052, Everett had been sent a contact request to JC Denton via Beth DuClare's secret routing station. After he contacts JC, he has him prove his loyalty by sending him to the Cathderele de Payens in Paris to acquire the vaccine to the Gray Death virus and access the MJ12 network. After JC acquires the vaccine and is proven loyal to the Illuminati, he is allowed into Everett's home and is told to meet up with X-51, a group of scientists from Area 51 who defected upon discovering the true intensions of Bob Page and Majestic-12.

Everett during a conversation 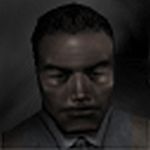 Everett communication icon
Add a photo to this gallery
Retrieved from "https://villains.fandom.com/wiki/Morgan_Everett?oldid=3582618"
Community content is available under CC-BY-SA unless otherwise noted.