Looking after Pearl Fey (both formerly).

Kill Maya Fey out of revenge (both failed).

In the anime, she was voiced by Shukuko Tsugawa in Japanese and Stephanie Young in English.

At first, Morgan seems to be a strict but loving woman who cares deeply about traditions and respect. However, under the surface, she is cold and cruel, due to her being a member of a lesser Fey branch. She holds all outsiders with disdain, including Phoenix Wright. She loathes the other Feys, including her niece, and was willing to frame or even kill Maya.

Despite this, she does care deeply about her daughter Pearl, as she is very overprotective of her and always wants what is best for her. Pearl is the main motivation for her crimes, as Morgan believes that she deserves to be the master of Kurain.

Before the events of the game, Morgan was married to a very wealthy man. After having two children with her, Iris and Dahlia, the man left her with their daughters due to her sister becoming the Master of the Kurian channeling technique. This caused Morgan to slowly develop a loathing for the other Feys. She managed to get married again, and had another child, Pearl. However, this marriage ended badly as well, with her husband leaving Morgan and Pearl. After Misty messed up in the DL6 incident, Misty left the village in disgrace and Mia left to investigate her disappearance. This left Morgan as the leader of the village and as Maya's chaperone.

Later, she teamed up with Mimi Miney to kill Turner Grey and frame Maya for it so Pearl could become the new master of Kurain. They managed to kill Turner and frame Maya. Phoenix and Lotta Hart tried to see what happened to Turner, but Morgan sent them away and helped Mimi clean up the crime scene.

A couple days later, Morgan came as a witness to try and prove that Maya murdered Turner Grey. She claimed that she attempted to remove the spirit, but Maya escaped. This lead into Mimi's testimony, where she claimed that she knew what Maya did when she escaped. However, Phoenix proved that they were both lying, proving the witness was Mimi and she was the murderer. Mimi and Morgan were arrested and incarcerated shortly after.

A year later, Morgan was transferred to another prison, where she met her daughter Dahlia, who was a death row inmate. They agreed to try and kill Maya one last time. Morgan planned to sent Pearl to get some hidden instructions at Kurain village. She would head to the temple, and once their, she would summon Dahlia. Dahlia would use to body to kill and get revenge on Maya, and Pearl would become the new master of Kurain.

However, Godot found out about her plan and warned Iris and Misty Fey. They decided to let Morgan and Dahlia carry out the plan so Godot could get revenge on Dahlia, and made a counter-plan. Misty would distract Pearl, and if it didn't work, she would channel Dahlia so that Pearl couldn't. Godot would then restrain her.

However, it didn't work as planned. Misty was forced to channel Dahlia, but couldn't keep her restrained. This forced Godot to kill her in order to protect Maya. Iris attempted to cover up, but was accused of being the killer. Miles and Phoenix both defended her. In the end, Dahlia's soul was completely destroyed and Morgan's last scheme failed. It is unknown what happened to Morgan after that. 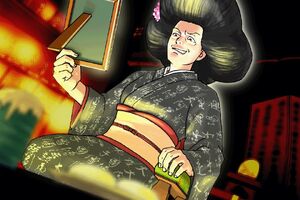 Morgan plotting to kill her niece. 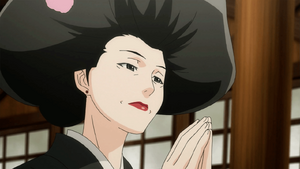