This version of Morgan Le Fay was created by Joe Maneely and the late Stan Lee.

Allegedly, two islands remained of Atlantis after it sank. These island did not sink until thousands of years later. On one of these islands, called Avalon, a member of its royalty was named Igraine. Igraine had a daughter named Morgan, who went to Britain with Myraddin, later Merlin, when Avalon sank.

Protesting the conversion of Britain to Pauline Christianity, Morgan opposed her half-brother, King Arthur Pendragon. Morgan attempted to used the Darkhold and was possessed by Chthon.

Later, when Merlin and the Black Knight went off to battle Morgan, a mutant Nordheimr Vanir impersonated Merlin, and Sir Percival was slain by Mordred. Morgan herself was imprisoned within her castle.

In modern times Morgan's astral form battled the Avengers. She briefly altered the world to her own twisted version with the team serving as her Queen's Vengeance.

Doctor Doom traveled back in time to ask for her help in defeating the Mighty Avengers. During his many visits they became lovers. She taught him magic but asked for a gift from the future. Doom claimed he couldn't, as it would cause disruption to the timeline. However, Doom did not consider their affair disruptive, as it was contained. Doom asked Morgan to tutor him further in the dark arts, including summoning an army of demons he used successfully to take down the Mighty Avengers.

Morgan traveled into the future with an army of demons to avenge Doom's betrayal. At first, she attempted to kill Doom when he was a child, but then decided to go ahead several decades, so that Doom would fully know why she was going to kill him, and engaged Doom in Latveria. When the Dark Avengers arrived to rescue Doom, the Sentry tore off her head, but she subsequently violently reappeared in his place, and took control over the new Spider-Man (Mac Gargan), who attacked Ares. She was killed again by the new Hawkeye (Bullseye), but she reappeared again. Morgan turned Ares into stone in seconds, while Doom and Iron Patriot traveled back in time to kill her in her own time. There, Doom chanted a spell of a language that even she possessed no knowledge of to forcibly send the sorceress into her own enchanted cauldron, despite her screams and pleas. Though Morgan lived, she was sent to 1,000,000 BC where she ran from a tribe of cavemen fighting a T-Rex. Doom magically restored Latveria and the revived Dark Avengers headed back to America.

Morgan Le Fay also appears in the 2010 Marvel Animated Universe, as a supporting antagonist of Season 4: Secret Wars and Season 5: Black Panther's Quest of Avengers Assemble. However, it should be noted that both seasons take place in different universe. She also appears as the main antagonist of the Ultimate Spider-Man Season 3: Web Warriors episode "Halloween Night at the Museum" as the main antagonist, and the episode is also a crossover to the Jessie sitcom. This appearance of her takes place in the same universe as Secret Wars.

Morgan le Fay appears in Season 3 of the Hulu TV series Marvel's Runaways as one of the main antagonists, alongside Jonah.

She is portrayed by Elizabeth Hurley.

She is a powerful sorceress using both nature magic and spells from the Darkhold. Morgan le Fay possesses a natural affinity for magical forces which is a result of her half-faeries genetic structure. She also possesses a gifted intellect, and as a former pupil of Merlin, she possesses a great deal of magical lore, considered one of the greatest sorceresses in Earth's history. Her magical powers are derived from three major sources.

Due to her faerie heritage she possesses innate personal powers such as the ability to control minds; she also possesses abilities all humans potentially have, such as the ability to engage in astral projection. She also has the faerie ability to manipulate mystical energy, often through spells and enchantments of ancient Celtic origin, an ability she has honed through practice. Finally, she has abilities as a high priestess of the Earth goddess (Gaea)) by invoking her Celtic name, Danu.

Not all of Morgan’s powers have been documented as yet. It is known that she can mystically manipulate both the natural environment of Earth and the environment of the astral plane in which she once existed. She can cast illusions, project mystical bolts (which can affect physical beings and objects even when she is in astral form), create mystical force shields and remove spirits from their bodies and place those spirits under her control. When in physical form, she can fly and change her shape into other people or animals (both real and mythical). She also has healing powers which she might have used on her former foe King Arthur on transporting him to Otherworld. Morgan is of gifted intellect.

Morgan can also tap into and manipulate powerful magical energies for powerful feats of magic without having to tax upon her normal magical abilities, such as when she used the power of the Norn Stones and the Twilight Sword to restructure reality. There may be an upper limit to how much energy Morgan can control as when she tapped into these energies she did so through the Scarlet Witch.

Beyond that, however, Morgan is virtually immortal. Her soul survived the physical death of her body, and she has even re-formed from the destruction of her astral form.

She possesses the ability to manipulate the forces of magic for a variety of effects, including mind control, illusion-casting, astral projection, the projection of mystical bolts of force, creation of mystic force shields, the removal of spirits from their physical bodies and mental domination of those spirits, healing, and the ability to mentally manipulate the natural environment of Earth and the astral plane on which she presently exists. She is also able to time travel and can come back from death using time travel. In her physical form, she was able to fly and change her shape into that of other people or animals. Morgan has utilized the Crimson Bands of Cyttorak to bind Doctor Strange and Balor, proving her capabilities of manipulating extra-dimensional mystical energies from the Octessence if needed.

Due to her hybrid nature (half-human and half-faerie), Morgan Le Fay has the faerie's vulnerability to "cold iron" or steel. These materials can cause her harm both in her physical form and astral form. 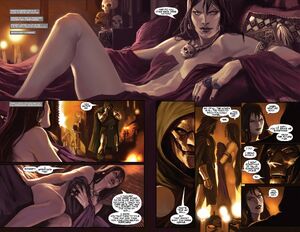 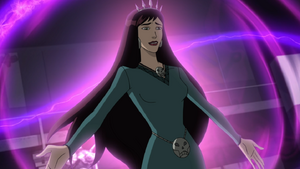 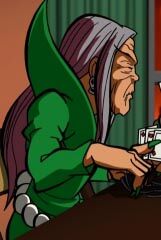 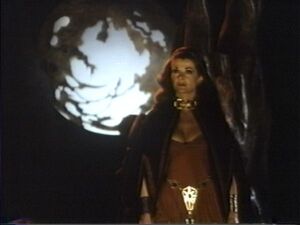 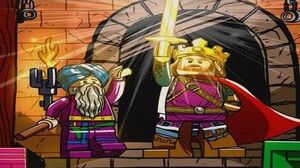