Villains Wiki
Register
Don't have an account?
Sign In
Advertisement
in: Female, Magic, Evil from the Past,
and 43 more

Founder and leader of the Morganians

Rule the Earth in eternal darkness and enslave or destroy humans via the magic of The Rising.

Morgana le Fay is the main antagonist of Disney's 2010 live action fantasy adventure movie The Sorcerer's Apprentice. She is a legendary baneful sorceress who is aided by certain wicked spellcasters Maxim Horvath and Abigail Williams in her plan of raising the souls of the evil dead sorcerers ("Morganians" named after her) and destroying the world.

She was portrayed by Alice Krige, who also played Mary Brady in Stephen King's Sleepwalkers, Christabella in the live action Silent Hill film, the Borg Queen in Star Trek First Contact, and Holda in Gretel & Hansel.

Morgana, once known as Morgan Pendragon, was a powerful witch and also the former apprentice of the legendary wizard named Merlin. After discovering her witchcraft abilities, Morgan asked Merlin to teach her magic and train her in the sacred arts of sorcery. As Merlin helped Morgan gain control over her powers, for years Merlin looked after Morgan with love and care, until she eventually betrayed him by practicing dark magic.

Morgana later engaged in an igniting feud against Merlin for quite some time, which culminated to latter's death. Merlin's hesitation when he overpowered her in their final duel and Veronica Gorloisen's decision to use the Human Fusion Spell on the powerful with indicated an unconfirmed history with the two; it is implied that Morgana was the senior to her fellow apprentices Balthazar Blake, Maxim Horvath, and Veronica Gorloisen, and that she formed a significant bond with Veronica as much as with Merlin. Unfortunately, their relationships became sour following Morgana's vile betrayal and foundation of Morganians, believing that spellcasters were more important than humanity. Regardless, she schemed to enslave the human race by casting a dark and powerful spell known as The Rising that would bend them to her will with the aid of the dead souls of past evil conjurers.

She began the demonstration of her supremacy by savagely attacking mortals, including those that were allied with Merlin.

She succeeded in killing her mentor with the help of another traitor, a former Merlinean named Maxim Horvath. Her last words to Merlin, were "I am no one's servant.". Later she tried to kill Merlin's two apprentices Balthazar Blake and Veronica Gorloisen, Veronica sacrificed herself by absorbing Morgana's soul into her via the Fusion Spell and her lover Balthazar locked them both in the Grimhold.

The Rising Has Begun

Centuries later when Horvath succeed in breaking the final shell of the Grimhold with the energy of both the foolish and irrational illusionist named Drake Stone and the malevolent and cruel witch named Abigail Williams, Morgana, while possessing Veronica's body, was set free. She was able to perform the Rising ritual in order to raise the dead. As she busily chanting incantations, Balthazar comes to stop them, but is immediately overpowered by Horvath.

Luckily Becky, Dave's girlfriend's disturbed the antenna of one of the positioned satellite dishes and the signal that was to perfect the dark ritual, thus The Rising was incomplete. At the same time, it rendered both Morgana and Veronica unconscious just as Dave disarmed Horvath with a Tesla Coil, allowed Balthazar to blasted him aside.

Balthazar then absorbed Morgana's dark soul into himself using the same magic spell known as the Human Fusion Spell (also known as the Fusion Spell) to free Veronica. He then begged both her and Dave seal him and Morgana inside the Grimhold. Both Balthazar and Veronica were unwilling to do it, but suddenly, Morgana possessed Balthazar to taunt them, before broke free and escaped his body and materialized into a ghostly form of herself, composed of electron dust.

Morgana then attacked both Balthazar and Veronica in an act of revenge by unleashing a huge stream of fire, but is stopped by Dave, whom finally awakened his Prime Merlinean powers, conjured a fire shield to protected his fellow Merlineans. Undaunted, Morgana fires plasma bolts on her enemies, and as she attempted to fire another plasma bolt on Veronica, Balthazar unexpectedly jumped to its path, and mortally wounded as result.

With no one stood between them, the two spellcasters ultimately fought and David won by using the electric power of his makeshift Tesla Coils and his Prime Merlinean powers to exploit Morgana's weakness and destroyed her once and for all.

The wicked sorceress Morgana le Day emerged as the mistress of the Forbidden Domain magic in New York City's Central Park District and the 6th and final boss of the Nintendo DS videogame adaptation of Disney's The Sorcerer's Apprentice. Unlike in the movie, in 9th century England, she does not became a spirit via the Human Fusion Spell and her third Merlinean enemy Veronica Gorloisen was never featured nor mentioned in the game, she instead was being defeated and imprisoned in the Grimhold by her second Merlinean foe, Balthazar Blake. Arriving at Central Park, Balthazar Blake and Dave Stutler are certain that Morgana le Fay, who was finally been released from the Grimhold in modern-day America already present there and Balthazar had a bad feeling about it. The natural haven is overflowing with Mana (magic energy of nature) from the Forbidden domain, and monsters Dave Stutler encountered there are stronger than the previous ones. In spite of this, Dave able to press on, with Balthazar encouraging him. Dave has overcome the odds and have gotten stronger over the course of his adventures. Getting closer to the center of the Forbidden domain, a castle emerged in the park, Balthazar revealed that a Morganian sorcerer built the place at this precise location within the 19th century. Because of it, the place was like a magnet for Mana from the Forbidden domain. That is why they had to found her fast, as had the Forbidden domain fully opened, she will have more than enough power to summon the dead via the magic curse known as The Rising. Once entering Battery Park, Dave found Morgana busily performing the incantation for raising an army of the dead. Sensing his presence, she mistaken Dave being Horvath in disguise, but Dave (under Balthazar's suggestion), denied by claiming that he is the Prime Merlinean destined to destroy her. Undaunted, Morgana belittles Dave being a mere boy whom in turn, responded that he is Balthazar's apprentice. Learning that Balthazar took Dave as his apprentice, Morgana sneers Dave for lacking Merlin's strengths and skills, making him weaker than either her or Merlin, the man who was once her mentor and mortal enemy. As the fateful final battle began, Balthazar told Dave that she is susceptible with electricity-based spell due to her shield deflects and nullifying other forms of magic. Since they are dealing with the evil sorceress that responsible for the Morganians' foundation, the fight will never be easy as she can conjure Marrok's signature concussive bolts from the ground, summoning monsters, performing Abigail's red mine bolts, advanced version of Horvath's temporal displacement ectoplasm mines, and armor-piercing blue bolts. Fortunately, with both his experience and learning Morgana's attacking pattern, Dave finally managed to defeat her and sealed her back into The Grimhold.

Morgana le Fay is an extremely powerful and deadly witch with a particular proficiency for black magic. She also possesses telekinesis and also elemental abilities such as fire and lightning. She conjures Plasma Bolts to attack her enemies without hesitating and without mercy.

When Morgana became a spirit, even without a physical body due to the power of the Fusion Spell (or specifically, whatever was left of her physical body turned into a glowing mass of electron dust that can reform and pass through anything), she can also possess people like she did with Veronica Gorloisen and Balthazar Blake. And she can avoid attacks (physical and magical) when these attacks only phased through her and not harm her.

Yet, Morgana is weak against electricity as electricity would render electron dust that her spirit form composed of solid, making her susceptible with attacks. Dave successfully exploited this by electrocuted her with several makeshift Tesla Coils and used his power to eliminate her completely.

Morgana is an utterly evil, selfish, villainous, uncompromising and manipulative sorceress who has no qualms over taking innocent lives in order to achieve her goals. She is definitely an antagonistic and venomous character to be reckoned with.

However, despite such great cruelty, Morgana is still indisputably fashionable and elegant, speaking with a proper English accent and carries herself with grace and dignity. She is also highly charismatic and attractive, being able to gather many Morganians (or at least those who have the potential of becoming such) over the centuries, however, this may also be due to Horvath's action to spread Morganian teachings while he was in pursuit of his nemesis Balthazar. 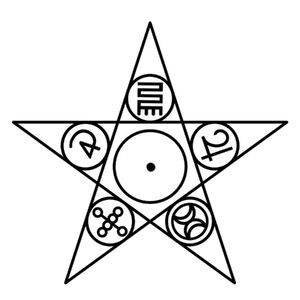 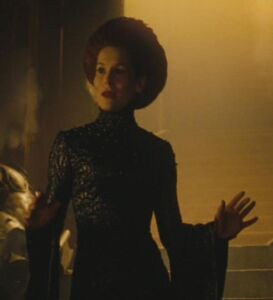 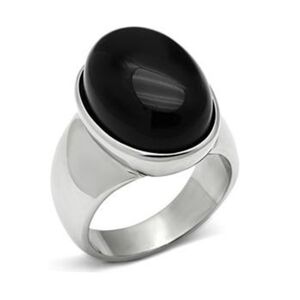 Morgana loses her soul that became imprisoned within Veronica Gorloisen via the Fusion Spell.

The spirit of the malevolent witch, Morgana le Fay. 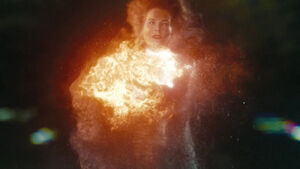 The ghostly Morgana le Fay retaliates at her enemies with the Fire Spell.

Morgana le Fay mercilessly attacks Dave while he builds up a plan to destroy her.

Dave Stutler used both science and his Prime Merlinean magic to destroy Mrogana le Fay once and for all.