To rule the Earth in eternal darkness and enslave or destroy humans via the magic of The Rising, seek revenge on Balthazar Blake and Veronica Gorloisen, destroy the Prime Merlinean.

Morgana le Fay is a powerful legendary sorceress and the primary antagonist of 2010 Disney film The Sorcerer's Apprentice. She is aided by certain wicked spellcasters Maxim Horvath and Abigail WIlliams in her plan of raising the souls of the evil dead sorcerers ("Morganians" named after her) and destroying the world

She was portrayed by Alice Krige.

Morgana who was once known as Morgan Pendragon, was a powerful witch and also the former apprentice of the legendary wizard Merlin. After discovering her witchcraft abilities, Morgan asked Merlin to teach her magic and train her in the sacred arts of sorcery. As Merlin helped Morgan gain control over her powers, for years Merlin looked after Morgan with love and care, until she eventually betrayed him by practicing black magic.

Because Morgana believed that witches and wizards were more important than humans, she plotted to enslave the human race by casting a dark and powerful spell known as the Rising that would bend them to her will and have the resurrected conjurors conquering the Earth. She began the demonstraition of her supremacy by savagely attacking mortals, including those allied with Merlin.

She succeeded in killing her mentor with the help of another traitor, a former Merlinean named Maxim Horvath. Her last words to Merlin were "I am no one's servant.". Later she tried to kill Merlin's two apprentices Balthazar Blake and Veronica Gorloisen, Veronica sacrificed herself by asborbing Morgana's soul into her via the Fusion Spell and her lover Balthazar locked them both in the Grimhold.

The Return of Morgana le Fay

Centuries later when Horvath succeed in breaking the final shell of the Grimhold with the energy of both the foolish illusionist Drake Stone and the malevolent witch Abigail WIlliams, Morgana while possessing Veronica's body, was set free. She was able to perform the Rising ritual in order to raise the dead.

Luckily Becky, Dave's girlfriend's disturbed the antenna of one of the positioned satellite dishes and the signal that was to perfect the dark ritual, thus The Rising was incomplete. At the same time, it rendered both Morgana and Veronica unconscious.

Balthazar then asborbed Morgana's dark soul into himself using the same magic spell known as the Human Fusion (Fusion Spell) to free Veronica. He then begged both her and Dave seal him and Morgana inside the Grimhold. Morgana then broke free and escaped his body and materialized into a ghostly form of herself.

Morgana then attacked both Balthazar and Veronica in an act of revenge before David Stutler, when he finally discovered his true power, but that he is the Prime Merlinean, stopped her fiery blast. The two conjurors fought and David won by using the electric power of his Tesla Coils and his Prime Merlinean powers to exploit Morgana's weakness and destroyed her once and for all.

Morgana le Fay is a sorcereress that is beyond evil. She kills people without giving a single thought, and thinks only of herself.

Morgana le Fay is a very powerful and deadly witch who is skilled in magic, particularly black magic. She also possesses telekinisis and also elemental abilities such as fire and eletricity. She conjures plasma bolts to attack her enemies without hesitating and without mercy.

When Morgana became a spirit even without a physical body due to the power of the Fusion Spell, she can also possess people like she did with Veronica Gorloisen and Balthazar Blake. And she can avoid attacks (normal and magical) when these attacks only phased through her and could not harm her. Yet, Morgana is weak against eletricity when Dave, the true Prime Merlinean exploit her weakness and used his power to eliminate her completely. 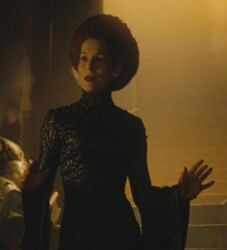 Morgana loses her soul that became imprisoned within Veronica Gorloisen via the Fusion Spell.

The spirit of the malevolent witch, Morgana le Fay.

The ghostly Morgana le Fay retaliates at her enemies with the Fire Spell.

Morgana le Fay mercilessy attacks Dave while he builds up a plan to destroy her.

Dave Stutler used both science and his Prime Merlinean magic to destroy Mrogana le Fay once and for all.
Add a photo to this gallery

Retrieved from "https://villains.fandom.com/wiki/Morgana_le_Fay_(Disney)?oldid=638221"
Community content is available under CC-BY-SA unless otherwise noted.