The Monster
Parasite
The Narrator

Playing with his prey.

Morgo, also known as Mr. Voice or The Monster, is the main antagonist of the 2019 indie horror comedy video game Little Misfortune. He is a demonic parasite from The Beyond that sadistically sustains himself by killing and feeding off of children, which he lures away with false kindness and games.

He was voiced by Henrik Norman.

Following the events of the developers' previous game Fran Bow (which Little Misfortune is in the same universe as), a war broke out between the different realities in an event called the Ultra-war. During this time, new beings were created or discovered, and they created their own realm outside of the Five Realms of Essential Existence known as The Beyond, a place of absurdity that does not obey the laws of physics. These creatures, referred to as Parasites, would frequently travel to the Third Reality to lure food away into The Beyond.

A university known as the University of Senersedeet Technology was put into place, which began using other creatures like spirit animals to serve as Protectors, who try to save victims from the Parasites and guide their departed souls to the afterlife of Senersedee instead of being lured into The Beyond.

Morgo was one of these Parasites, and was a very intelligent and successful one, luring many children into dangerous situations that resulted in their deaths, often by offering the promise of games and a prize known as "Eternal Happiness", and then lured their wandering and tortured souls to The Beyond for him to sustain himself with. He accomplished this with many children, including a Japanese boy named Hiro, a young girl named Daniella Bambini, a boy that he killed via rock slide (which made his grief-stricken father kill himself), and several others before setting his sights on the abused and neglected eight-year-old Misfortune Ramirez Hernandez.

Morgo narrates the game, as well as comes to Misfortune. Because she cannot see him, she believes he is a voice in her head, and refers to him as "Mr. Voice". He offers to play a game with her, with the prize being Eternal Happiness. Misfortune agrees, hoping that if she finds the Happiness, she can give it to her sad, but neglectful mother. Feigning kindness, Morgo lures her out of her home and into the street, where Misfortune catches a glimpse of Morgo's true appearance. She is afraid of the monster, but Morgo pretends all is well and has her keep going.

As they travel through the city on their way through the game, Morgo acts like a true parent to Misfortune, offering her treats, acting concerned for her safety, giving her advice, and even scolding her when she uses bad language. Whenever Misfortune comes across the fox Benjamin or his protection runes, Morgo lies to her and tells her that foxes are evil, dangerous creatures in an attempt to keep Misfortune away from her would-be protector. Along the way, Misfortune spots the ghosts of Morgo's past victims, but Morgo tries to convince her that ghosts are not real. At a few points, Misfortune says or does something that makes Morgo begin to reveal his true nature, getting angry with her and even demonstrating his true power by bending a lamppost, but always goes back to his faux kindness.

However, upon reaching the point where he was supposed to take her, it turned out that Benjamin had taken the "Eternal Happiness" to protect Misfortune. Morgo uses this to try and convince Misfortune again that Benjamin is evil. He leads Misfortune to the zoo, where he convinces her to go into a wolf cage to ask about Benjamin's location. The wolf leaves her alone, and the two head through the fun fair Phantasmagoria to reach a ferry to Benjamin's home. While there, Morgo decides to let Misfortune have fun playing games and riding rides, likely in hopes of luring her in and making her trust him more.

On the ferry, Misfortune's incessant talking makes the ferryman jump overboard, and Morgo shames her and tells her it is her fault. When Benjamin sets up a trap to try and stop Morgo, it almost catches Misfortune and Morgo uses it to lie about Benjamin some more.

However, Misfortune finally reaches Benjamin's house, and he explains through his journal who "Mr. Voice" really is and that he is the real villain. Morgo becomes enraged, telling Benjamin that he cannot keep all the children safe from him. He finally begins to reveal his true nature to Misfortune, telling her to go home and gain her Eternal Happiness, though Misfortune now sees him for the villain he is. She obeys, and takes the train home. She sees the ghost of Hiro, who tries to warn her of the Beyond, but Morgo takes him away, never to be seen again. Misfortune goes to her decrepit home, where Morgo is waiting. Despite having her, Morgo is so obsessed with the "game" he was playing with her going his way that he resets the world, starting the game at the beginning. However, Misfortune realizes things are the same and refuses to play along. Morgo, enraged, returns her to the previous world and begins chasing after her himself. He tells her that she is only alive because of him, and that she belongs to him. Just as he is about to claim Misfortune's soul, Benjamin comes in with a magical Primeve Illumination cane, which he uses to defeat Morgo with a blast of magic light. It is unknown if this killed Morgo or sent him somewhere else.

However, it is then revealed that Misfortune was already dead. When she stopped in the street and caught her first glimpse of Morgo, a car (presumably driven by her father), came over the hill and struck her, killing her instantly. The entirety of her journey, Misfortune was a wandering spirit that Morgo was attempting to lure into the Beyond. With him defeated, Misfortune admits her love for her grieving mother, and Benjamin leads her to the afterlife of Senersedee.

Morgo, in his "Mr. Voice" persona, acts very sophisticated and usually chipper. He fakes kindness and concern, all to lure children deeper into his traps. Due to targeting the abused and neglected Misfortune, he acts like a parental figure, giving advice, taking Misfortune to places her parents won't, and even scolding her for using bad language. He lies and manipulates throughout the journey, telling Misfortune that her protector is evil, all while trying to lure her into dangerous situations. Despite his façade, he has moments where he breaks it and begins to let his true nature sneak in, sometimes growing angry, arrogant, and prideful.

However, after his ruse fails, he allows his true wrathful, sadistic side to come out. He is obsessed with the "game" he created, and does everything to make it go his way. When this fails, he becomes openly furious and violent, mocking Misfortune for her shortcomings and laughing when Benjamin comes to save her. 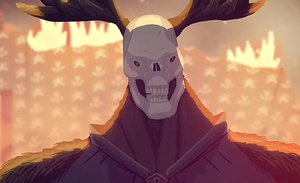 Retrieved from "https://villains.fandom.com/wiki/Morgo?oldid=3551708"
Community content is available under CC-BY-SA unless otherwise noted.