Morinth is an antagonist in the Bioware video game series Mass Effect. She was one of three daughters of the Asari Justicar Samara and also an Ardat-Yakshi, a vampiric entity that feeds off of the life-force of others. Choosing to embrace her monstrous nature, Morinth became a serial killer and her mother's chief nemesis.

She was voiced by Natalia Cigliuti.

Morinth was born to the Asari Justicar Samara, and like her sisters was born an Ardat-Yakshi due to a rare genetic disorder Samara suffered. While her sisters agreed to be confined to a Monastery to keep from succumbing to their darker tendencies Morinth instead chose to embrace her nature and roamed the galaxy, feeding off of others as Ardat-Yakshi do. With each kill Morinth grew more sadistic and hedonistic, committing all manner of crimes and becoming such a wicked individual that a guilt-ridden Samara made it her life's work to stop her daughter once and for all and bring her to justice.

Eventually, Samara tracked Morinth to Illium but was unable to keep her from escaping on a ship called The Demeter.  Morinth fled to Omega where she wasted no time murdering another innocent victim, this time a young woman who was easily seduced by Morinth and soon stripped of her vitality.

But this time Morinth would not get away so easily. Samara and her new ally Commander Shepard tracked Morinth to Omega, where Shepard was able to get Morinth's attention and convince her that the commander was an intriguing individual. Taking Shepard back to her apartment, Morinth attempted to seduce them, but found Shepard to be a harder catch than she'd thought. It was then that Samara appeared and confronted her monstrous daughter. What happens next is up to the player. Paragon players will allow Samara to finish Morinth, while Renegade players will betray Samara and let Morinth kill her, at which point Morinth joins the Normandy crew disguised as her late mother.

However it’s possible to fail to lure out Morinth and she escapes from the club and a distraught Samara realises it will take years for her to find her again.

However, if the Renegade outcome is chosen Morinth will later die anyway during the Reaper invasion and be turned into a Banshee-Husk that is then destroyed by Shepard and their allies during the last battle of Earth.

If Morinth escaped Shepard and Samara, it’s shown in the extended cut ending if Samara lives that she continues her persuit for her murderous daughter. If Samara is dead, then it’s likely Morinth manages to escape justice for her crimes and continued on preying and killing people and continues to grow even more powerful. 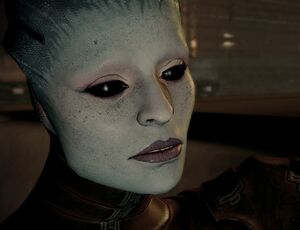 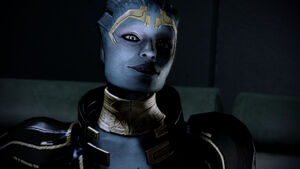