Hunting Spider-Totems throughout the Multiverse.

Devour every Spider-Totem in the Multiverse.

Morlun is a supervillain from Marvel Comics, primarily an enemy of Spider-Man. He is an Inheritor, a vampiric being who feeds on the mystical energy of "totems", a mystical bridge between man and animal. One particular "totemic" superhuman is the superhero Spider-Man, whom Morlun has attempted several times to devour. He is the main antagonist of the Spider-Totem storyline and The Other storyline, as well as the central antagonist of the Spider-Verse storyline and the Spider-Geddon storyline.

He was voiced by Travis Willingham in Spider-Man Unlimited who also voiced Zavok in the Sonic the Hedgehog series.

Though most of Morlun's past is vastly unknown, it is know that he is one of a family of energy-draining vampiristic group known as the Inheritors. Having taken over Earth-0, Loomworld, Morlun and his family attacked the mystical being known as the Master Weaver. However, when Morlun's younger brother, Karn, hesitated, their mother was struck down by the Weaver, erased from existence. Because of this, the family splintered apart. During his travels, he ended up on Earth-616 and soon targeted one of its heroes, namely Spider-Man.

Morlun hunted Spider-Man relentlessly, and in their first confrontation, Morlun gave Spidey the most powerful punch he had ever felt. With that physical contact, Morlun could track Spider-Man anywhere he went. Peter found out that Morlun's DNA was pure, and contained information from every genus in the animal kingdom. Spider-Man also discovered the Morlun had a weakness for radiation, and he used this to his advantage. Since the spider that had bitten him was radioactive, Peter went to a nuclear power plant and injected himself with enough radation to kill a normal human. When Morlun tracked him down there and attacked him to feed, he was burned by the radiation. Spider-Man then proceeded to beat Morlun mercilessly, giving out radiation with every punch. Morlun pleaded for his life, saying that he only hunted him to survive, an it was nothing personal. He was then killed by his former henchmen, who suddenly appeared and shot him. Morlun crumble into dust an was not seen for awhile.

Morlun mysteriously returned later an once again tormente Spider-Man, this time nearly killing him. When Peter was taken to the emergency room, Morlun snuck in and attempted to feed on him. When Peter's wife Mary Jane came in and tried to stop him, he casually broke her arm and threw her aside. Spider-Man then suddenly leaped up from his bed, mysteriously sprouting new spider powers, which he used to kill Morlun once again.

But he was once again resurrected by a secret cult, who sent him to Wakanda after the Black Panther. After killing the Panther's longtime foe, Man-Ape, Morlun tried to feed on the Panther, but was defeated by him and the new female Black Panther. He was then sent into a limbo dimension by Wakandan witch doctors.

He somehow survived that encounter (later revealed that his brother Jennix had set up an entire world full of clones) and resumed his hunt of other totemistic figures. When Spider-Man, urged by the visions released from the eye of Uatu the Watcher, released Cindy Moon, a girl who was also bitten by the spider that gave Spidey his powers, Morlun realized the real hunt had now begun. His earliest targets were Aaron Aikman (The Spider-Man) and Patton Parnel before slaying the Spider-Friends, an action seen by Spider-UK. After feasting on other Spider-Men, Morlun and his family made their ultimate move, attacking Earth-13, thought to be a safe zone thanks to the Spider-Man powered by the Enigma Force. His father, Solus, slew that Spider-Man while Morlun kidnapped Benjy Parker, baby brother of May "Mayday" Parker, and spiriting him away to Loomworld, needing him for a prophecy.

When Kaine attacked Loomworld, furious with grief after the Ben Reiliey Spider-Man was killed, the clone used his monstrous form, The Other, to kill Solus before Morlun returned the favor. And thanks to Cindy Moon's foolish attempt to save Spider-Woman, Morlun had all three pieces (The Bride, The Other and The Scion) needed to enact the prophecy that would allow them to eradicate all Spider Totems. His plan was derailed with Spider-Ham replaced Benjy and he went into a breakdown when the Superior Spider-Man slew the Master Weaver. With their plans defeated and the other Spiders bearing down on them, Morlun and his family was forced into exile in an radioactive wasteland world.

Morlun and the Inheritors return in the Spider-Geddon storyline as once again as the main antagonists.Morlun and his family manages to escape using Ock's cloning technology and manage to came back. Morlun seeks revenge against Spider-Man and attacks him viciously.Eventually Spider-Man and Morlun fought each other with Spider-Man vicorious.In the end the inheritors are defeated with Solus dead for good the surviving Jennix,Dameos,Brix,and Bora turned into Babies to clense them from Solus's corruption Morlun is the only surviving Inheritor imprisoned by NYPD.

He appeared in the video-game Spider-Man: Unlimited. In this game he appears alongside his father Solus and his brothers Damios,Jennix,and Karn. 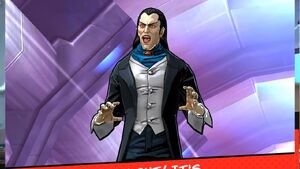 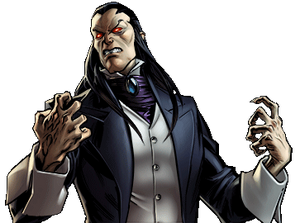