Fear Nothing Foundation (FNF or F.N.F. for short)
Hippies

Serve Lilith and help her harness the power of the Dreamers (abandoned).

Kill or neutralize Lilith (succeeded).
Release the Dreamers from captivity.

The Morninglight is a self-help group and New Age religious movement found in The Secret World, though they are quite clearly a cult in all but name, they initially appear insignificant compared to more obvious threats such as the Draug and the Filth. However, as the game continues and the player begins to unearth the group's secrets, the Morninglight's apocalyptic designs are revealed to be a more insidious threat than anything encountered in the field. They are nicknamed "Fear Nothing Foundation" ("FNF" or "F.N.F." for short) and "Moonies".

According to the pamphlets and spokespeople found throughout the game, the official purpose of the Morninglight is to guide humanity towards the next phase in its spiritual evolution and instituting mental change for the better. As such, they act not only as a New Age religion, but also as a self-help group, offering books on self-actualization, motivational DVDs and diet pills to troubled youths - even offering group therapy and managing social clubs in Tokyo. Throughout the world, representatives offer the Morninglight personality test free of charge, determining the taker's mental state and how the group can best help with their personal problems (the test is, of course, rigged). Morninglight dialogue is filled with references to light in one form or another, informing the public of how bright the future is and how essential it is that they awaken to the dawn and walk with them into the sunrise; most often of all, they remark on the limitless potential of humanity, proclaiming "We are all made of stars!"

To outsiders, the Morninglight's ideology is uplifting but worryingly vague, and with very good reason: the group is fiercely protective of its secrets, only allowing the barest modicum of information to reach the general public, and numerous layers of security exist within the Morninglight to prevent rebellious members from learning too much. Anyone attempting to leave the cult or release its secrets to the public is immediately labelled an "Obstructive Person" and effectively marked for death. However, very few members ever rebel: quite apart from the difficulty escaping the cult's reach, members are subjected to a rigorous indoctrination process designed to slowly destroy any sense of individuality until - as Alina Florea puts it - "you're willing to ask for the abuse and say thank you after." Most of the indoctrination process remains unknown except in the case of the group's Tokyo branch, the Fear Nothing Foundation.

Like its parent group, the FNF placed particular emphasis on the importance of the group and the insignificance of an individual, training its members to blindly follow pre-established methods for almost every daily task, from cooking to personal grooming. This was enforced through increasingly torturous punishments and procedures designed to break an individual's spirit, including "guided" meditation, revolting meals, and even the occasional enema. The treatments were so effective that, after being gently reminded that he should be shaving down instead of up, one member spent the next half an hour banging his head against the wall. More obstinate members were subjected to the experimental methods of the laboratories on the FNF center's third floor. All of these techniques and more were rationalized as methods of freeing the members of their fear, in much the same way that the Morninglight claims that its methods allow humanity to transcend their baser nature.

Behind the many layers of secrecy, however, the Morninglight's belief system is based entirely upon the worship of the Dreamers. Having drawn its ideology and doctrine from the ancient Roman cult of Deus Sol Invictus, they revere the Dreamers as gods and strive to serve them by any means available to them: initially, this required them to follow the orders provided to them (through secret channels) by Lilith, who had created the cult for this very purpose - intending to use them as an easily-led army of laborers in her attempts to chain the Dreamers to her will.

However, following the psychic intervention of the Dreamers themselves, Philip Marquard gradually seized control of the cult from within and re-dedicated them to releasing the Dreamers from captivity. To that end, the group has developed a fixation with their masters, particularly in the form of the Filth: like the Atenists and Deus Sol Invictus before them, they revere the Filth in all its guises, with Marquard making a point of selecting a Filth bomb for use in his assassination attempt on Lilith, and others deliberately exposing themselves to it in order to bring themselves closer to the will of the Dreamers themselves. In turn, they also distrust Gaia and her servants, with Morninglight scripture placing particular emphasis on mistrusting the Bee-infused player characters.

Most tellingly of all, their famed slogan, "We Are All Made Of Stars" is later echoed by the Dreamers themselves in their confrontation with Emma at the end of Issue #7: finding herself confronted by a horde of Filth creatures, she asks why the Dreamers would be interested in her when they eat stars - only for the Dreamers to reply "You are all made of stars!"

Since its creation, the Morninglight has always been based on the leadership of Philip Marquard; however, until comparatively recently, Marquard took orders exclusively from Lilith. Though credited as the group's founder and revered across the cult as a savior, he was little more than Lilith's puppet, serving as the public face of the cult while secretly following Lilith's commands to the letter. By the start of the game, however, Marquard has betrayed Lilith and now controls the Morninglight entirely. He is now subservient only to the Dreamers.

Below Marquard lie an unknown number of directors and priests, controlling the regional branches of the Morninglight like terrorist cells (a simile that only becomes more appropriate following the events of the Tokyo Incident). This ranking includes such figures as Fear Nothing Foundation overseer Naonomi Tanaka, and New England cell leader Freddy Beaumont - supposedly a close friend of Marquard himself. Next to the head of the cult, these individuals tend to know the most about the organisation's true purpose.

Below them are the loyal agents of the cult, including figures such as Che Garcia Hansson and Andrian Zorlescu. Completely indoctrinated into the cult, they have proved their worth to the Marquard and his lieutenants, and can usually be trusted to carry out their duties without supervision. Some seduce potential recruits into the cult; some acquire valuable artifacts for the cult's usage; some are even employed to act as hitmen, tracking down Obstructive Persons and eliminating them before they can threatening the Morninglight's interests.

The majority of the cult is comprised of simple worshipers, from the hippies in New England to the Fear Nothing Foundation membership. Most of these people have been indoctrinated to some extent or another, and serve a variety of purposes: some, like the pamphleteers found in London and New York, simply spread the word of the Morninglight to the public; others, like John Copley and Yuichi, were groomed to serve as "Messengers" - a euphemistic term for suicide bombers.

Along with the Fear Nothing Foundation, the Morninglight also fostered a notable adjunct of their organization in Tokyo. Based in an underground facility under the Orochi Housing Projects, this group was intended to induct and train the intellectual elite of Tokyo's potential recruits; to that end, they distributed pamphlets and posters deliberately targeting youthful intellectuals, providing encrypted directions to their underground "clubhouse." Only the cleverest and most determined individuals would be able to follow the chains of clues to the end and join the group. Ironically, this intelligence requirement actually ended up working against the cult leaders following the Tokyo: when the Morninglight overseers attempted to strand their wunderkind within Clubhouse, the kids were clever enough to find means of escaping the complex - and by extension, the attentions of the Priest of the Blinding Light. 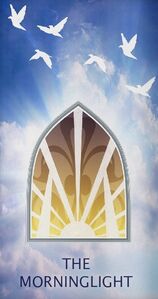 The official public logo of the Morninglight self-help cult. 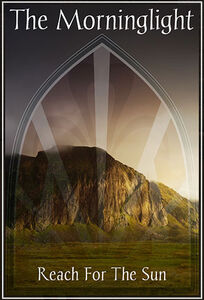 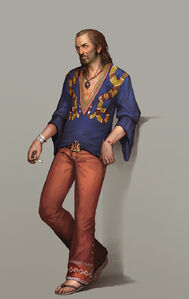 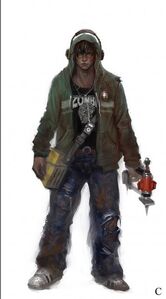 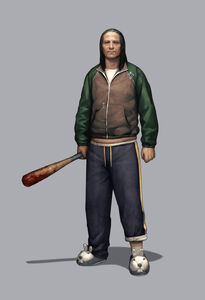 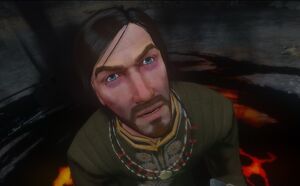 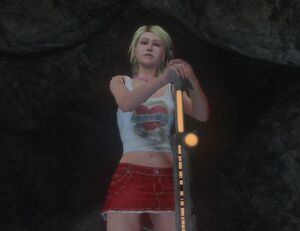 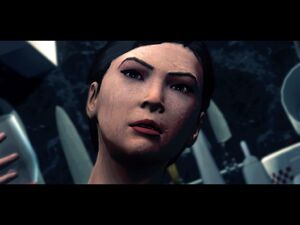 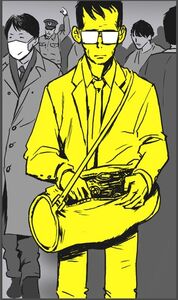 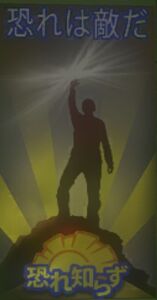 A Fear Nothing Foundation poster. 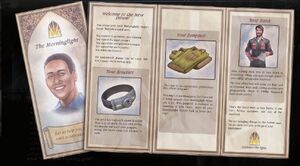 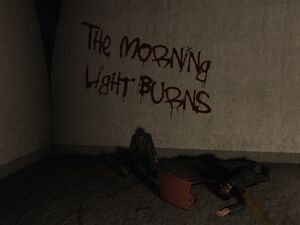 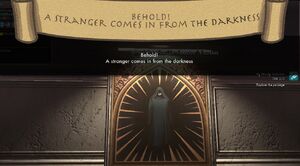 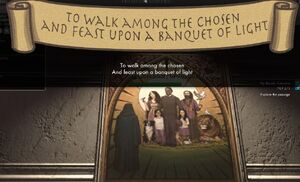 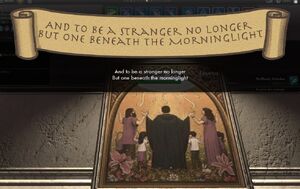 Retrieved from "https://villains.fandom.com/wiki/Morninglight?oldid=3890886"
Community content is available under CC-BY-SA unless otherwise noted.