Leader of the Moro Corps

Moro, also known as Planet-Eater Moro, is the main antagonist of the Galactic Patrol Prisoner Saga in Dragon Ball Super. He is a powerful wizard who threatened Universe 7 about ten million years ago.

10 million years ago, Moro destroyed the Iragi Star System and brought about mass extinction on 320 planets. During his fight with the Grand Supreme Kai and the South Supreme Kai, Moro used his magic to attack the Supreme Kais with comets. Upon absorbing life energy from a nearby planet, Moro condenses the energy into a ball and eats it causing his strength to grow even further. Ultimately, the Grand Supreme Kai uses up all of his god powers and successfully seals away Moro's magic where he is then imprisoned by the Galactic Police. He is sentenced to death but nobody is strong enough to end his life and so he stayed locked away for the next 10 million years.

The seal on Moro's magic power has broke, allowing him to escape from the Galactic Patrol's prison which Merus believes is due to him regaining some of his magic.

Moro escaped on a spaceship with Cranberry (a former soldier of Frieza) and heads for New Namek where he meets Goku and Vegeta. Moro talks about how he's finally free after 10 million years of imprisonment and that his magic has returned before his lifespan ended. While Goku and Vegeta are discussing, Moro uses his powers to pull Esca out of a nearby house and tries to kill him. Vegeta saves Esca immediately as he promised that he won't let Moro kill any Namekians. Shortly after that, Vegeta starts fighting Moro but Moro isn't surprised or fazed by Vegeta's Godly power. After exchanging a few blows, Moro removes his robe and reveals the true form he was hiding. He's now ready to face Vegeta and tells him that if Vegeta wants to see his magic powers, he will gladly demonstrate his prowess. As it seems that the Prince is overpowering him, he is secretly sucking the life essence from Vegeta. Moro looked younger and was stronger too. Moro defeats Vegeta and Goku to look for the other Dragon Balls. He kills a Namekian Warrior, demonstrating his power. He moves to confront Goku and Vegeta again, but Merus interrupts them. When he fights Merus, he is caught off guard by Merus and is temporarily trapped, but is enraged and breaks free when he senses the Grand Supreme Kai's presence in Majin Buu. However, Buu proves to be more than a match for Moro, easily pinning him down.

Fortunately for Moro, Cranberry was able to finish collecting the Namekian Dragon Balls. Moro quickly has Cranberry use his second wish to restore his full magic power. He quickly rushes to Cranberry's location, then kills him, and steals the third wish. Upon being confronted by Goku and Vegeta, he says they will figure out his final wish on their own when the time comes. He teleports away from view to a nearby cliff.

Shortly afterwards, Moro attempts to draw all the energy from New Namek but is interrupted by the appearance of Goku, Vegeta and the Grand Supreme Kai who have teleported to his location. Moro kicks the Kai further out into outer space where the two Saiyans can't follow and proceeds to overwhelm the Kai with his superior power. During the battle, Merus appears and distracts Moro long enough for the Kai to grab a hold of him and teleport him back to Namek where Goku and Vegeta are waiting for him. When Vegeta vows to destroy him, Moro reminds them that they have forgotten about his third wish. It is revealed that his final wish was for every prisoner in the Galactic Prison to be set free.

The prisoners board a spaceship and are led by Saganbo who head to New Namek to be assist Moro. Moro commends Saganbo and as promised shares his power with all the prisoners, empowering them significantly. As the prisoners battle Goku, Vegeta and Grand Supreme Kai, Moro begins absorbing energy from them and the planet once again. Goku asks why he is doing all this and Moro responds by telling him that he desires to create an ideal galaxy where he is free to consume planets. With no other choice, Goku and everyone else escapes from New Namek just before it dies. Moro has Saganbo send out his scouts so that they can seek out planets with a lot of life energy and makes his way to Planet Zoon where he absorbs all of the planet's energy and consumes it (along with the inhabitants).

Later, Saganbo informs him that they have received a distress signal from the Macareni Siblings. Moro, believing that the inhabitants could be strong, has Saganabo send out a stronger scouting party to verify it, saying that he will devour the planet if it proves to be the best quality.

After Shimorekka contacts Saganbo to relay information on the situation on Earth, Moro learns that Seventhree had already made use of his abilities. Curious to see how his abilities are being put to use, Shimorekka switches to monitor mode so they can see what is happening. Moro is surprised to see how much Earth has evolved over the last ten million years and that it hosts warriors even more powerful than his men. After hearing that Goku and Vegeta are training to defeat him, Moro has Saganbo order his men to retreat believing that he can get more energy out of them later. He vows to consume the two Saiyans upon their return along with the Earth.

Shortly afterwards, Moro senses Vegeta's new found might after he dispatches of Yuzun to deal with the Yadrats. Delighted, Moro vows to stock up and reach the outer limits of his power before traveling to Earth, wondering if he even has limits in the first place. Over the next two months, he devours more planets and billions of innocent lives across the galaxy. After heading to Earth, his henchmen scatter across the planet to steal it's treasures. Moro watches as his men struggle in their confrontation of the Z Fighters, deriding them for not even performing to his lowest of expectations and ponders on which one of the warriors he will devour first.

The ship descends to the ground below and as Android 17 almost defeats Seventhree, Moro arrives, grabbing Seventhree by the head. Saying that he should not have used his abilities so casually, he tosses him to Shimorekka and tells him to help him recover, as he will make use of him again. As Saganbo joins Moro, Piccolo and Gohan point out Moro's terrifying power. Moro notes that the other two Saiyans are not here, but Gohan says that they will come and, until then, they are in charge of protecting Earth.

In good spirits due to the amount of high energy the individuals there are on Earth, Moro wonders how best to go about consuming them. Saganbo suggests that he can handle them himself, not happy with how the rest of his crew has performed and Moro allows it as long as he keeps them alive. Before heading into battle, Moro gives Saganbo some of his energy, which dramatically powers him up.

Moro is a large humanoid goat with front pointing horns on both sides of his head. He stands in a slouching-pose and has noticeable wrinkles with a scrawny frame. He has long dark nails and tufts of fur on his shoulders. He also dresses in long red robes with a hood and has baggy dark pants with a fur pelt wrapped around his waist and white bandages around his wrists and ankles. After absorbing all of Goku and Vegeta's energy, Moro became noticeably younger-looking with proper posture and few wrinkles. He also became fairly muscular and his beard shrunk dramatically to a more manageable length. After taking almost all of Namek's energy, Moro's beard shrunk even more. Once he absorbed the last bit of life energy on New Namek, Moro's beard essentially disappeared while regaining a very youthful and well-muscled appearance.

Moro is extremely heartless, greedy and cataclysmic as he has no real respect for life in general. Rather, he views all living things as food for his pleasure and scoffs at people who try to stop him. Moro lacks empathy as he only cares about himself and nothing more.

He is also very deceitful and manipulative, as he used Cranberry to help restore his power and immediately eliminated him after he outlived his usefulness, as well as feigning weakness until he was able to absorb enough of Vegeta's energy to defeat him.

Moro often speaks in a calm, collected tone, but his calm demeanor gives way to extreme rage when in the presence of the Grand Supreme Kai, since the former has harbored a huge grudge against the latter for eons.

Moro holds a strong command over his forces and does not like it when his subordinates act on their own. This is seen when the Macareni Siblings go to Earth without informing Moro beforehand, and upon learning this, Moro sent a scouting party to search the planet and ordered Shimorekka to kill the siblings, stating traitors acting on their own are dispensable.

Moro has also shown that he cares nothing for his own men, and purposefully pumped more energy into Saganbo, knowing the damage it was doing to his body, which eventually causes his death. When Goku questioned him about this, Moro replied that he saw Saganbo as a soldier, of which more can be collected, much to the former's disgust. This attitude was later shown again, where he kills Shimorekka before devouring SevenThree in order to regain the upper hand. 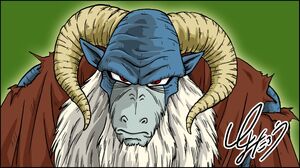 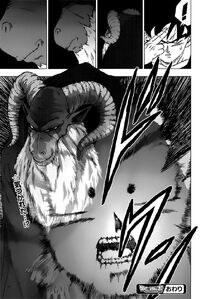 Moro notices Goku while locking onto his ki. 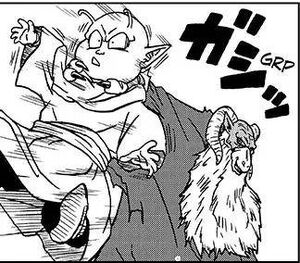 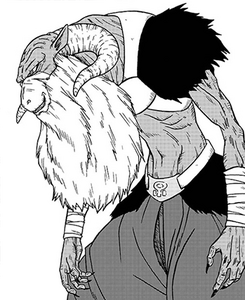 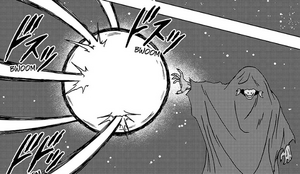 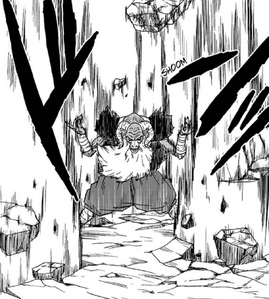 Moro summons energy up from the planet itself. 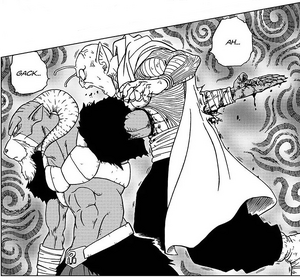 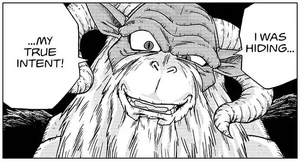 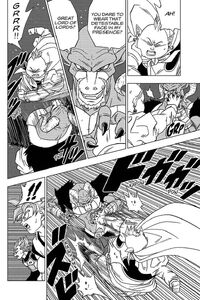 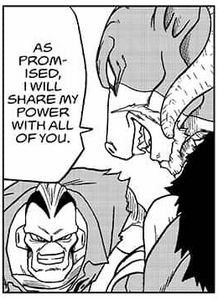 Moro and his right-hand man Saganbo. 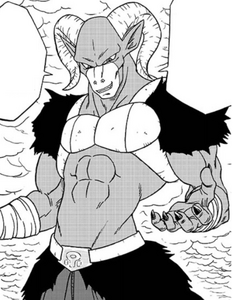 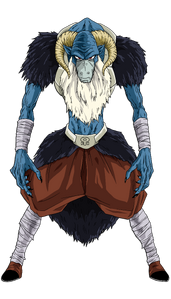 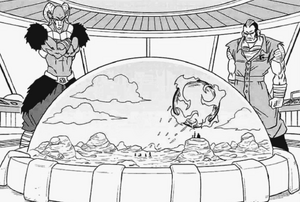 Moro and Saganbo watching a battle on the monitor. 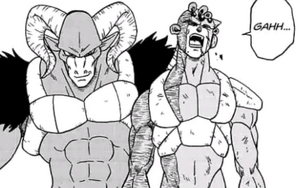 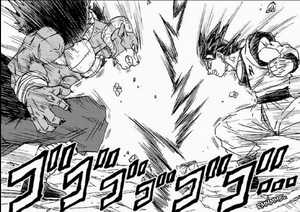 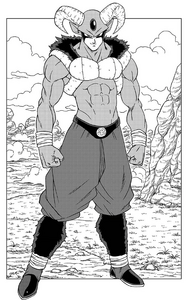 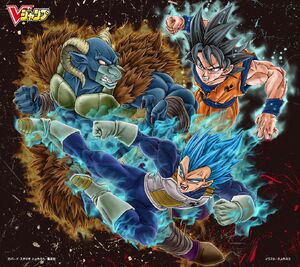 Retrieved from "https://villains.fandom.com/wiki/Moro?oldid=3898592"
Community content is available under CC-BY-SA unless otherwise noted.