Leader and high priest of the Children of the Cathedral

Achieve "unity" over the wasteland

Morpheus is a major antagonist in Fallout. He is the fanatical leader of the Children of the Cathedral, a front created by the Master to preach his plan of "unity".

He was portrayed by David Warner, who also portrays the Dr. Wrecker voice of Rob from The Amazing World of Gumball; The Evil Genius from Time Bandits; Ed Dillinger Sr., MCP, and Sark from Tron, Ra's al Ghul from the DC Animated Universe, the Archmage from Gargoyles, Jon Irenicus from Baldur's Gate II: Shadows of Amn, and The Lobe from Freakazoid!.

Morpheus was originally a member of the Rippers, a ruthless gang of inbred family members from the Boneyard. He had been a member for ten years before eventually leaving the Rippers to start a doomsday cult. The Rippers were eventually exterminated by the Gun Runners, a rival gang.

In 2152, the cult was discovered by the Master. The Master was the leader of a group of Super Mutants who captured humans and dipped them in vats of Forced Evolutionary Virus (F.E.V.) in order to turn them into super mutants, though if a person were to have been affected by radiation, they would die a painful death when exposed. His plan was to turn everyone into Super Mutants to establish unity. Realizing the benefits of using living humans, the Master enlisted the aid of Morpheus and his cult to act as public front for his plan of unity.

In 2155, the apprehension of a caravan of vault dwellers led to the discovery of the Los Angeles Vault. The Master was transferred to the vault, conquering its inhabitants, and the cultists start using the vault as their powerhouse. A cathedral is renovated on top of the vault, leading to the formation of the Children of the Cathedral, with Morpheus as its leader.

Children of the Cathedral

After weeks of meditating and fasting, those wishing to serve the cathedral would start out as initiates, also known as acolytes. Once they proved their loyalty to the Children of the Cathedral, they would become servitors. After their indoctrination, they would be brought to the Inner Sanctum where they were tortured and had drug injections. Those who survived with their psyche intact would be granted a rank, a COC badge, and a purple robe. Those who didn't were kept as laborers and soldiers with their minds being filled with Children of the Cathedral dogma. Worthy servitors could be taken to the vats in order to become Super Mutants.

Morpheus is an opportunistic, power-hungry cult leader. He is driven by his search for power rather than his belief in the Master. This makes him a dangerous foe, willing to carry out the Master's plan and kill anyone who stands in his way, in order to put himself as the leader of the wasteland. This can be shown by the fact that he considers the Master a "partner" rather than a god, and the fact that he is willing to abandon the Children of the Cathedral once his plans fail.

On the outside, he seems to hold a pious demeanor and seems to want to guide others to a path of salvation. However, if the Vault Dweller says the Master is "your master" to Morpheus, he will reveal his true colors. He doesn't believe that the Master is a god and simply views him as an equal, even though his superiors view him as inferior, particularly the Lieutenant.

Overall, Morpheus is a psychopathic and power-hungry cult leader who will be willing to abandon the cult when it comes down to it. He strikes vileness in his enemies, particularly Nicole. He is even described by the official strategy guide, or "survival" guide, as "intelligent, crafty, sly, greasy, and thoroughly evil. Ensnared by the promise of power rather than by belief, he has a short fuse and terrible anger, which makes him an extremely dangerous individual."

Morpheus's talking head model has the face of an old country preacher. He has black hair that is as short as his hairline out front, but long at the back. He has two very short mustaches located above the ends of his mouth, and has green eyes. He wears the same purple robe that many members, servitor or above, wear. As a result, he uses the same sprite as many of the members, including High Priest Jain.

Morpheus is described as being intelligent, which can debatably be shown by how successful the Children of the Cathedral had been for a decade. His primary stats are very high, with Charisma and Luck being put at 10, his Intelligence being put at 9, and the rest of the stats except one being put at 8. His weakest stat is Strength, which is set at 7. His proficient in energy weapons, melee weapons, small guns, and hand-to-hand combat; his choice of weapon by the time he is met is the AK-112 assault rifle. 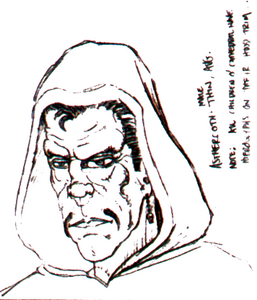 A later Concept art of Morpheus. 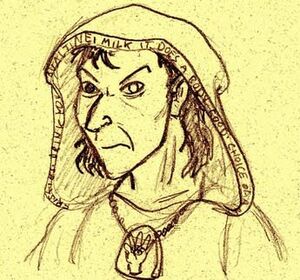