Villains Wiki
Register
Don't have an account?
Sign In
Advertisement
in: Mature, Terrorists, Doctors and Scientists,
and 25 more

Experimenting with the T-Virus.

Use the T+G Virus to become a monster and kill both Bruce McGivern and Fong Ling.

Create a world where only true beauty exists.

Morpheus D. Duvall is the main antagonist in the video game Resident Evil: Dead Aim. He is the former researcher for Umbrella Corporation who becomes a bio-terrorist in 2002, holding the world hostage with the T-Virus.

He was voiced by Angus Waycott.

The facility director for the company waste disposal facility on an island in the Atlantic Ocean belonging to Umbrella HQ's R&D division until the late 1990s, Morpheus was used as a scapegoat for the outbreak at the Arklay Laboratory in May 1998, and fired for "gross negligence". Morpheus is completely bitter, resentful, and vituperative, so he distanced himself from the company, sinking into madness with the idea of revenge in mind. Plotting his vengeance, Morpheus enlisted the help of a number of others under his goal of establishing a new world order in Africa. A missile-base was constructed underwater in the Atlantic Ocean, just underneath the abandoned B.O.W. disposal facility; this was completely unknown to Umbrella, which had been running tabs on Morpheus since his suspension.

He was utterly obsessed with beauty and grace, his ultimate ambition being to create an extravagant, impressive, beautiful, fabulous, and elegant world by destroying the cold and ugly world which exists today. Being a highly egocentric, intelligent, narcissistic, perspicacious, and manipulative megalomaniac, Morpheus believed himself to be a portrait of perfect beauty and underwent re-constructive surgery to maintain his youthful appearance, and possibly some gender-reassignment surgeries.

On September 18, 2002, Morpheus stole several "T" samples from Umbrella Europe's Paris laboratory as well as the highly-experimental T+G Virus, intending to use the latter to hold the world for ransom when used as the warhead for the missiles. His demand was for the United States and China to pay him $5,000,000,000.

After this, the Umbrella-owned luxury cruiser, Spencer Rain, was hijacked by the group in order to gain transportation to the base. The virus was released on-board, along with the B.O.W. complement being transported across the Atlantic, killing the passengers and crew, alike.

Morpheus's plans hit a snag, however, when U.S.S. STRATCOM member Bruce McGivern managed to make his way on board the cruiser and sabotage his plans. Morpheus managed to personally hunt down and hold McGivern at gunpoint, despite the dangers of the t-Virus outbreak aboard the ship. However, due to the intervention by the Chinese special agent Fong Ling, not only did McGivern manage to escape, but Morpheus himself was left horribly injured.

Desperate to make both McGivern and Ling pay, Morpheus injected himself with the T+G Virus (created by fusing the T-Virus with a G-Virus antibody), which mutated him into a feminine Tyrant-like creature. Unlike previously seen cases of either the T-viruses or G-viruses, Morpheus managed to maintain his mind after his transformation. His mutation kept his overall shape humanoid, while still endowing him with the strength and speed.

However, after engaging Ling and McGivern on several occasions and sustaining severe damage as a result, the mutagenic effects of the "G" component of the t+G Virus began to run rampant in Morpheus's body, much as in William Birkin's transformations. Like Birkin, Morpheus began to succumb to the virus, losing all rationality and thought as his transformations became more and more monstrous. In the end, McGivern caused so much damage to Morpheus that the mutations spiralled out of control, turning Morpheus into a gigantic blob of flesh that eventually exploded after a long chase, annihilating him once and for all. 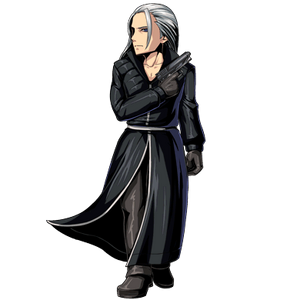 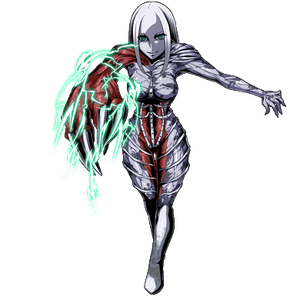