Unknown, as of yet.

The unnamed Butterfly, better known under the form of Morpho Knight, is a recurring antagonist in the Kirby franchise. Mainly serving as a background character in Kirby's Return to Dream Land, Kirby: Triple Deluxe, and Kirby: Planet Robobot, it later serves as both the final boss of the "Guest Star" of Kirby: Star Allies and the penultimate antagonist of Kirby and the Forgotten Land.

Introduced as a seemingly innocuous butterfly seen fluttering in the background of Planet Popstar, upon possessing Galacta Knight and later Soul Forgo, it takes the form of a warrior similar to Meta Knight before attacking any nearby opponents, apparently foretelling the "Day of Judgement".

As a butterfly, Morpho Knight is an imago with bright yellow and orange markings on its wings.

In its main form, Morpho Knight closely resembles characters like Meta Knight and his initial host Galacta Knight, and could be assumed to resemble Kirby when unmasked. It is a black sphere armored with an orange horned helmet with black markings, as well as golden boots and orange wings that grow yellow at its edges. It wields an sword with a golden wing-pattern hilt, an orange razor blade, and a blue gem in it's center.

As Morpho Knight EX, he takes on a black and red color scheme, with his sword's gem now colored yellow.

The Butterfly was first introduced in Kirby's Return to Dream Land, where it mainly appears in cutscenes of Kirby and his friends on Planet Popstar. It continued this role in every mainline Kirby video game following this.

Morpho Knight debuts in the game's "Guest Star ???? Star Allies Go!" as the final boss. When Galacta Knight emerges through a portal in the Jambandra Base created by Hyness, the Butterfly appears and rests upon his sword, absorbing him into its body (much to the shock of route's protagonists) and transforming into its main form before attacking the protagonists. Upon its defeat, it levitates in the air before fading away in a burst of butterflies.

Morpho Knight later reappears in the Soul Melter and Soul Melter EX difficulties of "The Ultimate Choice", once again as the penultimate boss before Void Termina.

Morpho Knight returns (and canonically debuts) as the final boss of the "Forgo Dreams" world. It first appears in its butterfly form as Fecto Elfilis becomes Soul Forgo, where it rests on its nose and absorbs it into its body before becoming Morpho Knight and then attacking Kirby. Upon its defeat, it again levitates and disappear into a burst of butterflies. However, Fecto survived being assimilated by it and retained its DNA to become Chaos Elfilis. 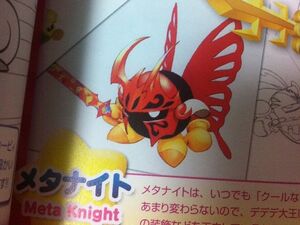 The concept art that would later be reused as Morpho Knight's design. 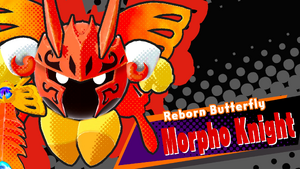 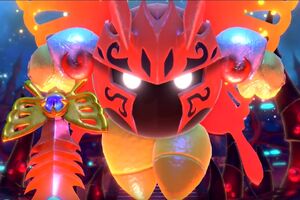 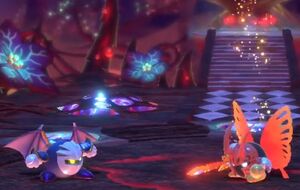