Mortianna is the secondary antagonist in the 1991 film Robin Hood: Prince of Thieves. He is George's mother.

She was portrayed by the late Geraldine McEwan.

Mortianna is a mysterious witch who dwells in a dungeon-like chamber within Nottingham Castle. She is the mother of the Sheriff of Nottingham, though he is unaware of this for much of the story, and she continuously spies on him through a small peephole concealed in the wall. Mortianna tends to mix various substances including her own blood and saliva in order to gain answers to puzzling situations. During one of her visions, she foresaw the death of her son and herself at the hands of Robin and Azeem respectively. This vision made her very afraid of the "painted man".

Mortianna’s goal is to have her son become King of England and have him produce a child with a woman of royal blood (namely Maid Marian) so her bloodline, one that worships the devil, will have a legitimate claim to the throne. It will also mean power for herself as well since having her own son as king would essentially make Mortianna the Queen Mother.

She is a very sadistic and evil person, traits she very much passed on to George. Mortianna claims to have stolen a baby, presumably one born to a family of high status and killed it so her son could take it's place and eventually become Sheriff.

Despite her wicked nature, Mortianna genuinely loves her son and like any mother is always there when he needs her. Even after he confront her about her spying and manipulations while in a drunken rage, Mortianna simply told him the truth about being his mother and her reasons for helping him become King which ultimately calmed George down.

When Maid Marian is forced to marry the Sheriff, Mortianna is present during the ceremony and she attacks Robin Hood's sidekick, Azeem, when he attempts to break down the door. Azeem manages to impale her on her own spear but she quickly runs off down a corridor with the spear still embedded in her, presumably to her death. However, after Robin kills the Sheriff, Mortianna suddenly appears and attempts to kill him. Azeem rushes into the room and hurls his scimitar sword straight into Mortianna's chest, sending her flying backwards where she promptly dies. 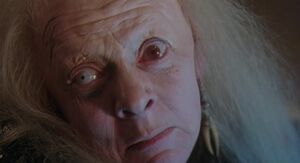 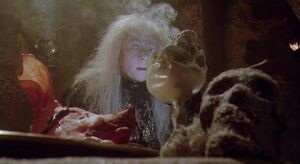 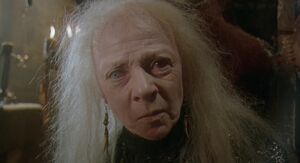 Mortianna reveals that the Sheriff of Nottingham is her son 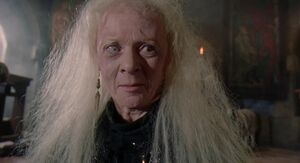 Mortianna at the Sheriff of Nottingham's wedding ceremony 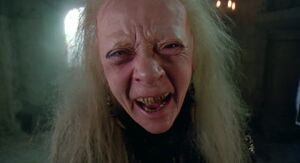 Mortianna is impaled on her own spear 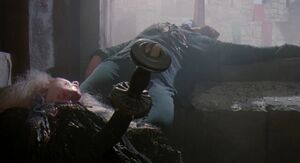 Retrieved from "https://villains.fandom.com/wiki/Mortianna?oldid=4220965"
Community content is available under CC-BY-SA unless otherwise noted.